This blog introduces how CART algorithm works for classification and regression Decision Tree, how we understand and predict with the Decision Tree.

Like SVMs, Decision Trees are versatile Machine Learning algorithms that can perform both classification and regression tasks, and even multioutput tasks. In this blog, I will introduce Decision Trees with following point:

Training and visualizing a Decision Tree

To understand Decision Trees, let’s just build one and take a look at how it makes predictions. 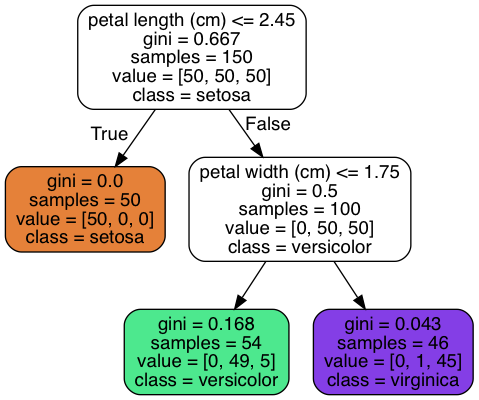 How to classify a flower with the classification decision tree above? Imagine that you find a flower whose petal length is 3 cm and petal width is 2 cm. Now we start at the root node (depth 0, at the top), this node asks whether the flower’s petal length is smaller than 2.45 cm. In our case, it is, so we move down to the root’s right child node (depth 1, right). Then we judge that the petal width is greater than 1.75 cm, so we continue to move down to the root’s right child node (depth 2, right). In this case, it is a leaf node, which means that it doesn’t have any children nodes, so it does not ask any questions. The decision tree predicts that your flower is Iris-Virginica.

Scikit-Learn uses the Classification And Regression Tree (CART) algorithm to train decision trees. The algorithm first splits the training set into two subsets using a single feature k and a threshold t_k (e.g. “petal width <= 2.45 cm”). How does it choose k and t_k? It searches for the pair (k, t_k) that produces the purest subsets.

Once it successfully split the training set into two, it splits the subsets using the same logic; it stops recursing once it reaches the maximum depth. We can control hyperparameters for stopping conditions (min_* and max_*), we can also regularize the model with them. Reducing max_depth will reduce the risk of overfitting.

A decision tree can estimate the probability that an instance belongs to a particular class k.

If a flower’s petal is 5 cm long and 1.5 cm wide, it is predicted as an Iris-Versicolor. 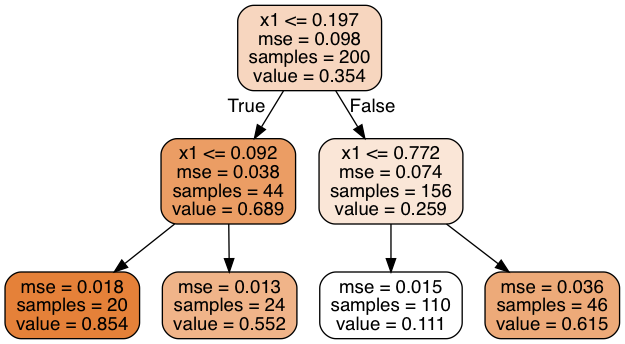 The main difference between the regression tree and classification tree is that instead of predicting a class in each node, it predicts a value. The algorithm splits each region in a way that makes most training instances as close as possible to that predicted value.

In this blog, I introduced how CART algorithm works for classification and regression Decision Tree, how we understand and predict with the Decision Tree. Hope it’s useful for you.