In this challenge, we need to analyse what sorts of people were likely to survive. In particular, we also need to apply the tools of machine learning to predict which passengers survived the tragedy.

The sinking of the RMS Titanic is one of the most infamous shipwrecks in history. On April 15, 1912, during her maiden voyage, the Titanic sank after colliding with an iceberg, killing 1502 out of 2224 passengers and crew. This sensational tragedy shocked the international community and led to better safety regulations for ships.

One of the reasons that the shipwreck led to such loss of life was that there were not enough lifeboats for the passengers and crew. Although there was some element of luck involved in surviving the sinking, some groups of people were more likely to survive than others, such as women, children, and the upper-class.

In this challenge, we need to analyse what sorts of people were likely to survive. In particular, we also need to apply the tools of machine learning to predict which passengers survived the tragedy.

Python packages to be applied

=> There are missing data in “Age”, “Cabin” and “Embarked”, especially “Cabin” whose 77% data are missing. So we will ignore it during the analysis.

What should we do on missing data of “Age”? We might replace null by median age. Same for “Embarked”

=> On average, the probability of one passenger being survived is 38%. 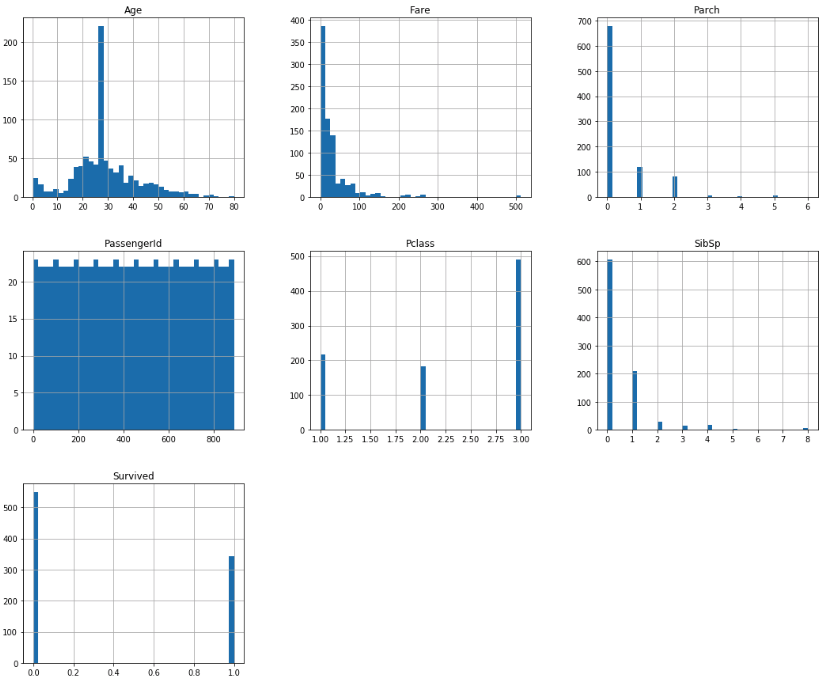 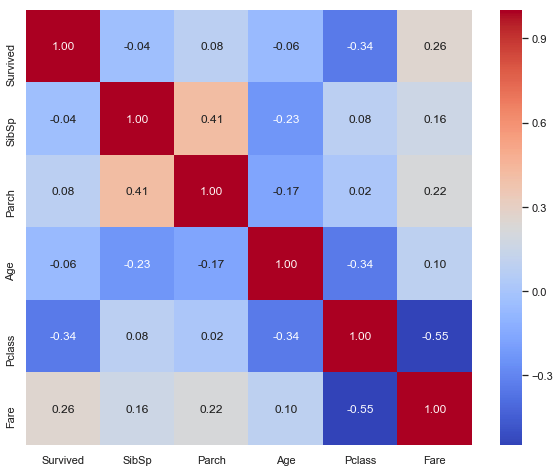 According to this correlation heatmap, we find that “Survived” possibility is slightly negative correlated with “Age”, which means that the older the passenger is, the more possible he will be survived; it’s significant at 5%. “Pclass” and “Fare are negatively correlated which is logic: the better class is, the more expensive fare is. “Pclass” is also negative correlated with “Survived” possibility, maybe the top class’s location is nearer to exit?

Among all survivals, the majority was female.

Among all survivals, the majority was female.

“Age” distribution is nearly a Normal distribution. We find that the most survived are the people around 25 year-old, which might because there were lots of younger on the board. However, people older than 50 year-old is less survived, which is not exactly same as analysis above. The graph below will explain why.

Age vs. Sex vs. Survived

According to this plot, we find that both female and male passengers are nearly half survived, since the shadow surface of “Survived” and “Non-survived” are nearly the same. But the survived possibility is different on ages for female and male. For female passengers, the ones that older than 27 year-old have a little bit more chance to be survived than others. For male passengers, the one who is younger than 15 years old or older than 34 years old are more likely to be survived than men between 16 and 32 years old, which because they help other passengers to be alive.

Moreover, let’s pay attention to the passengers that were older than 50 year-old. According to the graph “Age vs. Survived” we find that people older than 50 year-old is less survived, which is not exactly same as correlation analysis. But from this graph we can easily understand why: most of older passengers were male, most of the older survival were female, and they were nearly all survived. So in fact, older female passengers had much more chance to be survived than older male passengers.

For the class of survived passengers, it’s almost same for each class, the possibility for class 1 is a bit more higher than others. However, non-survived probability of class 3 is 3 times of class 1 and class 2, respectively. This is coherent with analysis above. 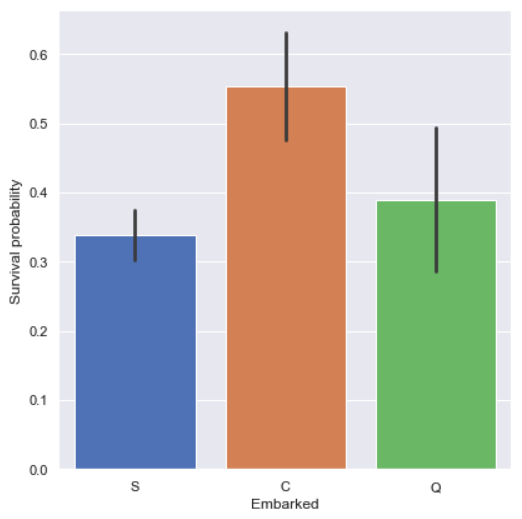 Passengers who came from Cherbourg (Embarked='C') had more chance to be survived, so we’ll study why they were most survived in the following.

According to this graph, we find that the majority of passengers came from Southampton (Embarked='S') and lots of them chose class 3 which decrease the survived chance. However, the majority of passengers who came from Cherbourg (Embarked='C') were in class 1, such their chance to be survived was more than others, which is coherent with result above.

Finally I chose soft voting classifier in order to avoid the overfitting and applied it to predict survivals in test dataset.