In this blog, we’ll turn to forecasting, starting with popular exponentialmodeling approaches that use weighted averages of time-series values[1].Exponential models are some of the most popular app...

In this blog, we’ll turn to forecasting, starting with popular exponential modeling approaches that use weighted averages of time-series values[1].

Exponential models are some of the most popular approaches to forecasting the future values of a time series. They’re simpler than many other types of models, but they can yield good short-term predictions in a wide range of applications. They differ from each other in the components of the time series that are modeled. I’ll introduce them one by one.

Simple exponential smoothing uses a weighted average of existing time-series values to make a short-term prediction of future values. The weights are chosen so that observations have an exponentially decreasing impact on the average as you go back in time.

The prediction at time

(called the 1-step ahead forecast) is written as

weights sum to one, and the 1-step ahead forecast can be seem to be a weighted average of the current value and all past values of the time series. The alpha parameter controls the rate of decay for the weights. The closer alpha is to 1, the mor weight is given to recent observations. The closer alpha is to 0, the more weight is given to past observations. The actual value of alpha is usually chosen by computer in order to optimize a fit criterion. A common fit criterion is the sum of squared errors between the actual and predicted values.

Simple exponential smoothing assumes the absence of trend or seasonal component. The next section considers exponential models that can accommodate both.

The Holt exponential smoothing approach can fit a time series that has an overall level and a trend (slope). The model for an observation at time t is

The Holt-Winters exponential smoothing approach can be used to fit a time series that has an overall level, a trend, and a seasonal component. Here, the model is

represents the seasonal influence at time t. In addition to alpha and beta parameters, a gamma smoothing parameter controls the exponential decay of the seasonal component. Like the others, it ranges from 0 to 1, and larger values give more weight to recent observations in calculating the seasonal effect.

The ets() function and automated forecasting

The ets() function has additional capabilities. You can use it to fit exponential models that have multiplicative components, add a dampening component, and perform automated forecasts.

The ets() function can alse fit a damping component. Time-series predictions often assume that a trend will continue up forever. A damping component forces the trend to a horizontal asymptote over a period of time. In many cases, a damped model makes more realistic predictions.

Finally, you can invoke the ets() function to automatically select a best-fitting model for the data. Let’s fit an automated exponential model to the Johnson & Johnson data. 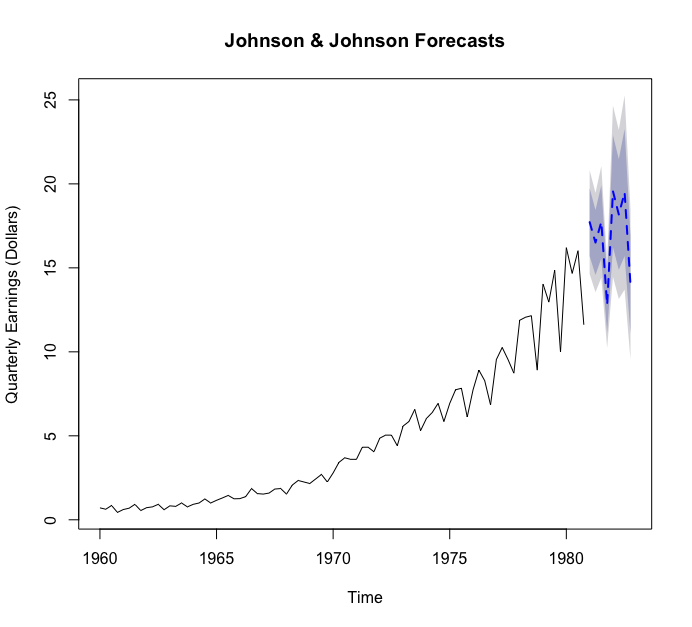 The selected model is one that has multiplicative trend, seasonal, and error components. The plot forecasts the next eight quarters. The forecasts are a dashed line, and the 80% and 95% confidence intervals are provided in light and dark gray, respectively.

As started earlier, exponential time-series modeling is popular because it can give good short-term forecasts in many situations. A second approach that is also popular is the Box-Jenkins methodology, commonly referred to as ARIMA models. These are described in the next blog.