In this blog, I’ll introduce ARIMA forecasting models. In the autoregressive integrated moving average (ARIMA) approach to forecasting, predicted values are a linear function of recent actual values and recent errors of prediction (residuals). Before describing ARIMA models, we need to define a number of terms: lags, autocorrelation, partial autocorrelation, stationarity and differencing[1].

is the correlation between a set of observations (

is the correlation between the Lag 1 and Lag 0 time series,

Stationarity is often evaluated with a visuel inspection of a time-series plot. If the variance isn’t constant, the data are transformed. If there are trends, the data are difference. You can also use a statistical procedure called the Augmented Dickey-Fuller (ADF) test to evaluate the assumption of stationarity.

With these concepts in hand, we can turn to fitting models with an autoregressive (AR) component, a moving averages (MA) component, or both components (ARMA). Finally, we’ll examine ARIMA models that include ARMA components and differencing to achieve stationarity.

In an autoregressive model of order p, each value in a time series is predicted from a linear combinatioin of the previous p values

are the weights, and

is the irregular component.

In a moving average model of order q, each value in the time series is predicted from a linear combination of q previous errors. In this case

are the errors of prediction and the

Combining the two approaches yields an ARMA(p, q) model of the form

that predicts each value of the time series from the past p values and q residuals.

An ARIMA(p, d, q) model is a model in which the time series has been differenced d times, and the resulting values are predicted from the previous p actual values and q previous errors. The predictions are “un-differenced” or integrated to achieve the final prediction.

Let’s apply each step in turn to fit an ARIMA model to the Nile time series.

Ensuring that the time series is stationary

First we plot the time series and assess its stationarity. 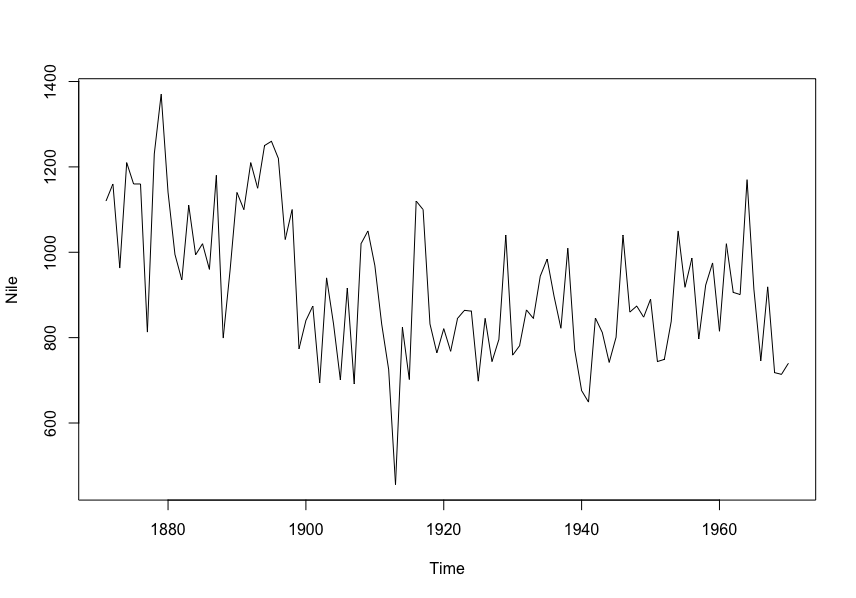 The variance appears to be stable across the years observed, so there’s no need for a transformation. There may be a trend, which is supported by the results of the ndiffs() function.

The differenced time series is plotted as following and certainly looks more stationary. Applying the ADF test to the differenced series suggest that it’s now stationary, so we can proceed to the next step. 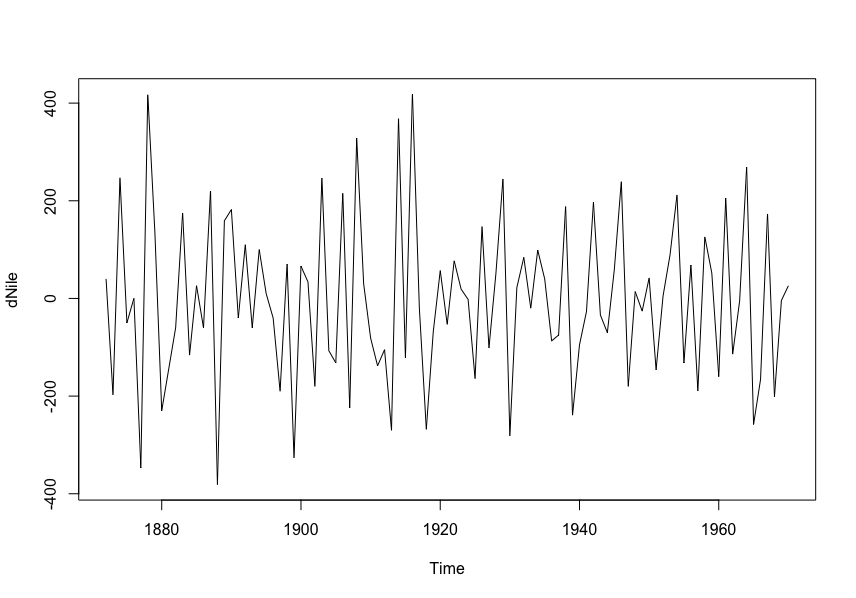 Identifying one or more reasonable models

Possible models are selected based on the ACF and PACF plots: 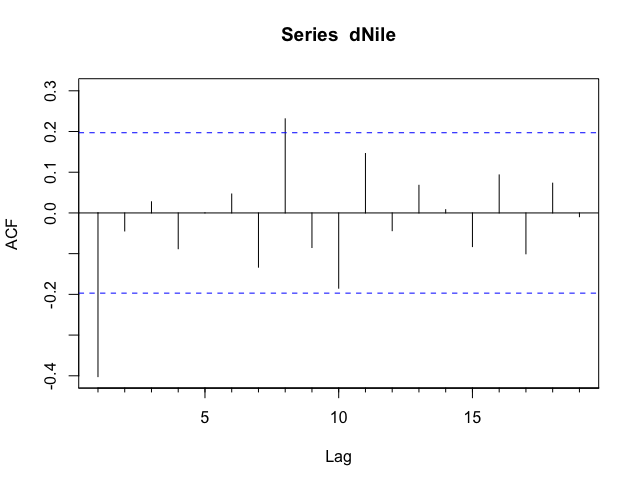 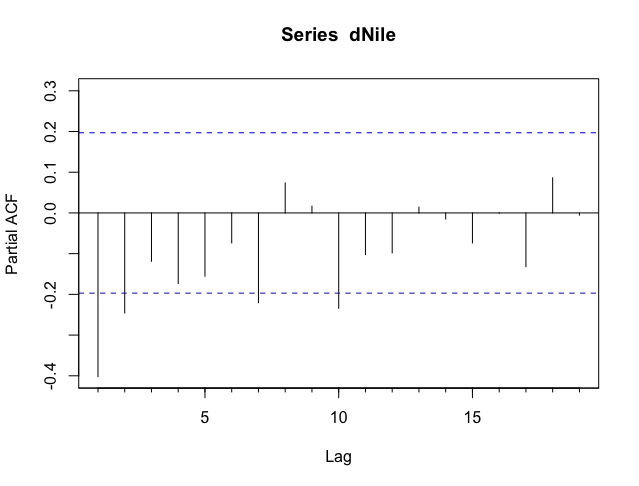 For the figure above, there appears to be one large autocorrelation at lag 1, and the partial autocorrelation trail off to zero as the lags get bigger. This suggests trying an ARIMA(0, 1, 1) model.

The coefficient for the moving averages (-0.73) is provided along with the AIC. If you fit other models, the AIC can help you choose which one is most reasonable. Smaller AIC values suggest better models. The accuracy measures can help you determine whether the model fits with sufficient accuracy.

If the model is appropriate, the residuals should be normally distributed with mean zero, and the autocorrelations should be zero for every possible lag. 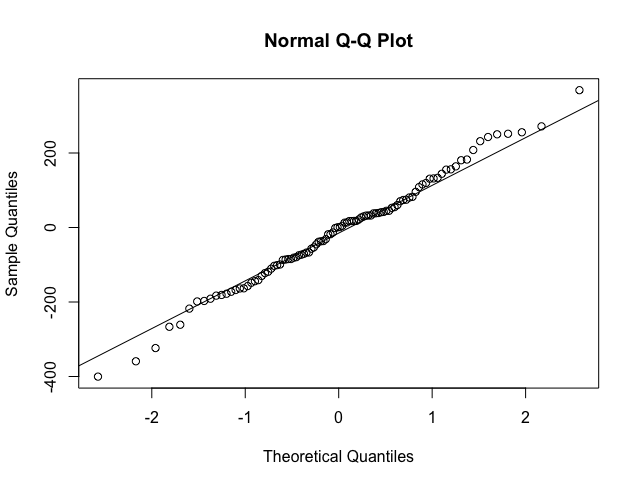 Normally distributed data should fall along the line. In this case, the results look good.

Once a final model has been chosen, it can be used to make predictions of future values. 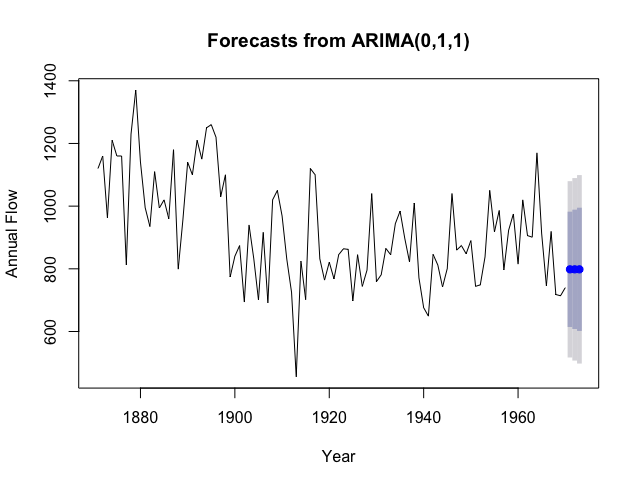 Point estimates are given by the blue dots, and 80% and 95% confidence bands are represented by dark and light bands, respectively.

In the last 3 blogs, we’ve looked at how to create time series in R, assess trends, and examine seasonal effects. Then we considered two of the most popular approaches to forecasting: exponential models and ARIMA models. Although these methodologies can be crucial in understanding and predicting a wide variety of phenomena, it’s important to remember that they each entail extrapolation - going beyond the data.