Since the internship will be finished in a few days, I’m seeking employment andreceived several invitations of interview, one of these company is FABERNOVELDATA & MEDIA. After the first telepho...

Since the internship will be finished in a few days, I’m seeking employment and received several invitations of interview, one of these company is FABERNOVEL DATA & MEDIA. After the first telephone interview, there was a data-analysis test, which is really interesting. Thus, I would like to share with you.

There are 288,425 observations and 12 variables in the dataset, which are extracted from the the web FABERNOVEL and describe various information of web accessing. The following table gives a description of all variables.

Moreover, we need to preprocess data before analysing.

Thanks to the blog on site web R-bloggers, which used the Tukey’s method to identify the outliers ranged below and above the 1.5*IQR(interquartile). In the blog, the author also shares the following R script that can produce boxplots and histograms with and without outliers, the proportion of outliers as well.

Here, I will show the result of variable pageviews’ outlierCheck as an example. 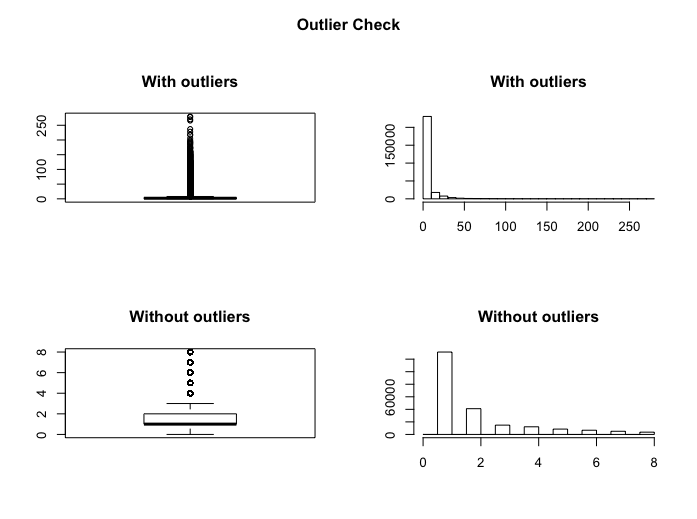 Another thing should not be forgotten before analysing is data visualisation. According to the following graphs, we could see information clearly and efficiently. 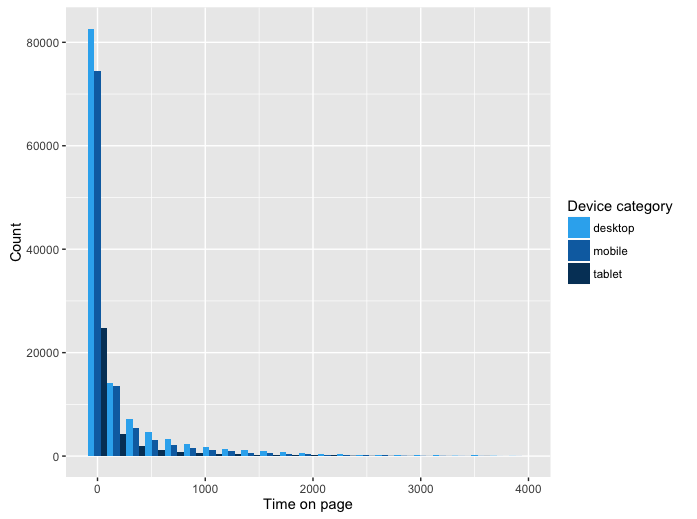 By the histogram above, we can observe that the sum of time spent on one page is mostly shorter than 1000 units; and among 3 device categories, desktops are most used, while the users of tablet are the least. 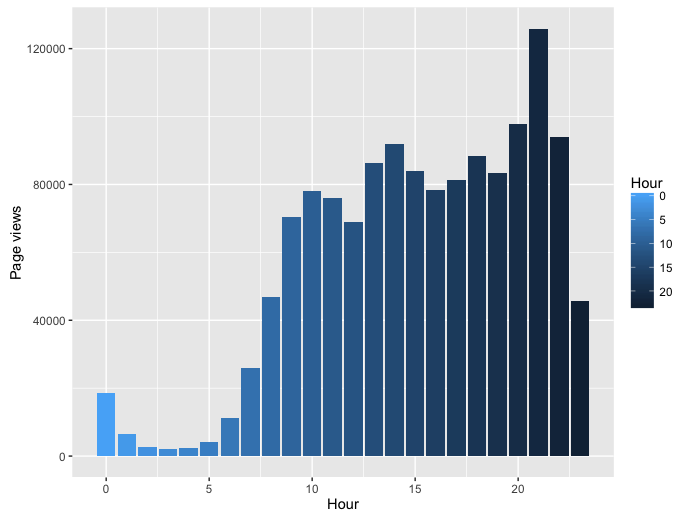 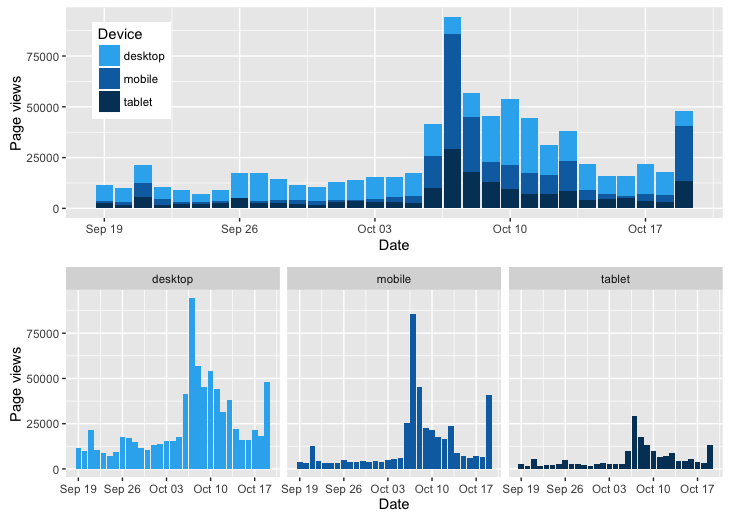 These two graphs describe Page views’ tendency in terms of Date, with respect to different devices. The first graph shows the overlapped page views of 3 devices, which does a favour for comparing directly the page views among all devices; so we can observe that page views’ amount from desktops is the most among three devices, and during the period Sep. 19th - Oct. 19th, webpages are more viewed from 6th October and reach the peak on 7th October, then page views decrease slowly until 18th October and increase suddenly on 19th October. The three graphs which are below the previous one display the tendency of each device separately. Obviously, the results are similar as the first graph, but they contribute to the analysis of Date-Page views relation for each device.

In order to summarize the dataset while trying at the same time to keep the maximal information contained among the variables. I firstly used the Principal Components Analysis (PCA) technique. 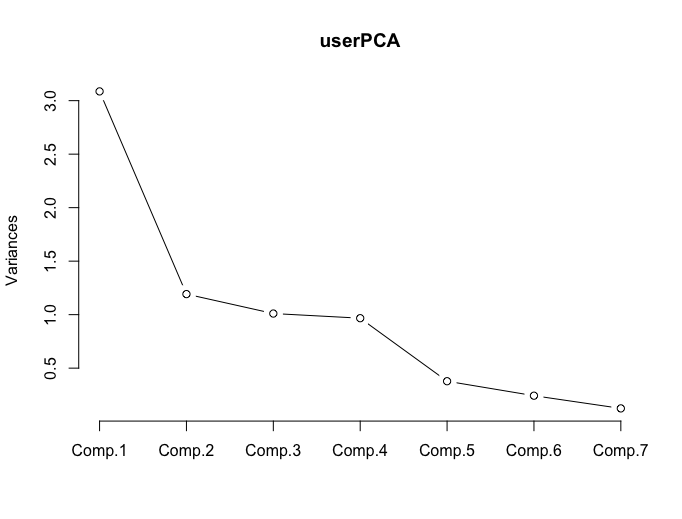 By the following, I’ll take the first and the second principal component as an example to interpret the result of PCA. 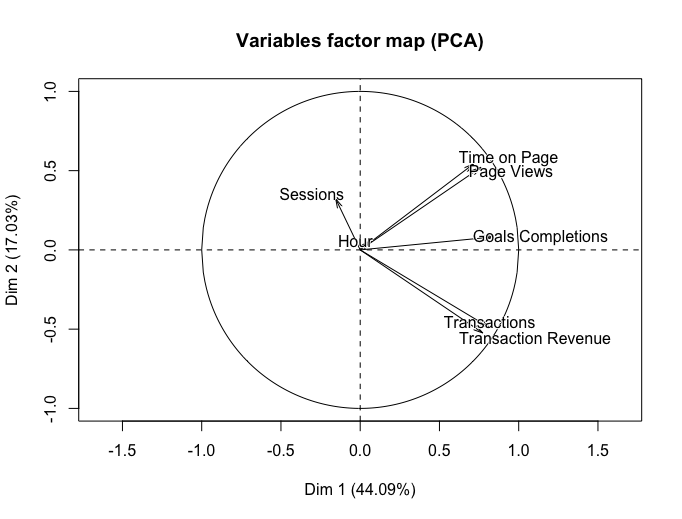 From this scatterplot, we got the

The second method that I used is Clustering(CL). This technique will enable us to check different groups of observations. Members in each group are similar and close to each other.

In order to apply Clustering k-means method, we can use the function kmeans().

The following graph describes Time on Page’s tendency in terms of Page Views, with respect to different clusters. In this graph, four clusters are presented clearly: the internauts in cluster 1 spend more than 2000 units of time on the webpage; the internauts who spend more than 250 time units but less than 1000 time units are in the second cluster; while in the third cluster, the time that people spend on the webpage is between 1000 and 2000 time units; finally, for the people who are in cluster 4, browsing webpage only takes less than 250 time units. In this case, we can make different strategies of internet advertising for different clusters. 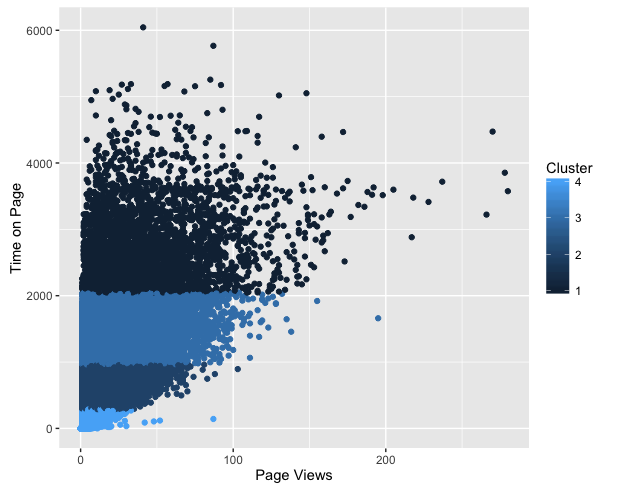 Here is what I want to share with you, really enjoyable, right?

If you are interested in the R script, please check it on my Github, all propositions are welcome!