Paris is the capital and most populous city of France. Since the 17th century, Paris has been one of Europe's major centers of finance, diplomacy, commerce, fashion, science, and the arts. All thes...

Paris is the capital and most populous city of France. Since the 17th century, Paris has been one of Europe’s major centers of finance, diplomacy, commerce, fashion, science, and the arts. According to the Economist Intelligence Unit Worldwide Cost of Living Survey in 2018, Paris was the second most expensive city in the world, after Singapore, and ahead of Zürich, Hong Kong, Oslo and Geneva. Another source ranked Paris as the most expensive, on a par with Singapore and Hong Kong, in 2018. All these elements help to bring the increasing price of real estate in Paris. In this blog, I’ll talk about the second-hand apartments purchases in Paris between January 2014 and June 2020, with the following points:

First of all, I downloaded real estate transactions’ data on the site of government. In the dataset, we have transaction’s information from January 2014 to June 2020, like “id_mutation” to identify the transaction, “nature_mutation” specifies the sale’s nature, “nombre_pieces_principales” indicates the number of rooms, “valeur_fonciere” presents the sold price, “code_commune”, “nom_commune” and “code_departement” specify the communities and departments, “surface_reelle_bati” describes the real surface area, longitude and latitude can help us to determine the location. 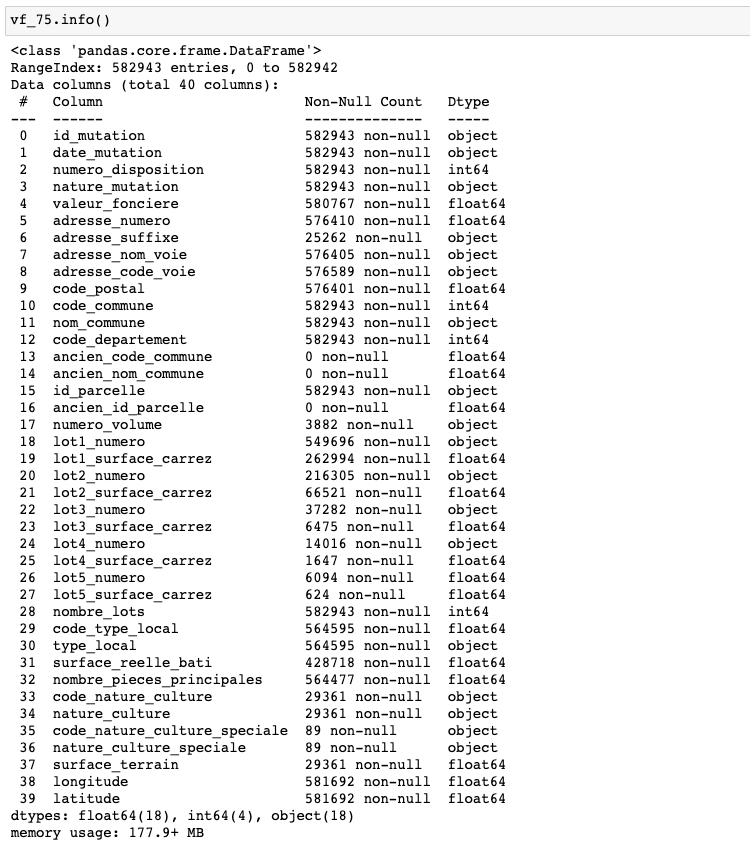 For this analysis, I only took account of second-hand apartments’ transactions with a positive area in Paris. 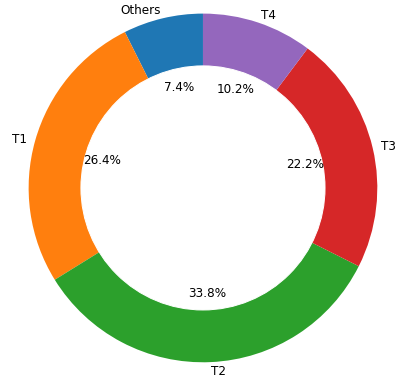 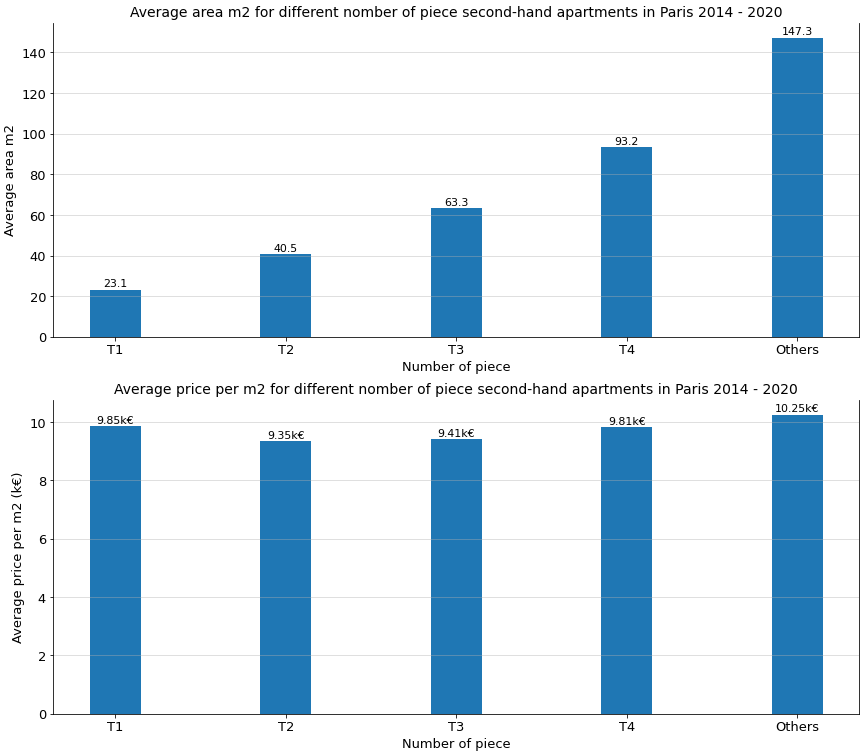 This graph describes the average price m2 for the different number of piece second-hand apartments in Paris, between January 2014 and June 2020. According to the second graph, we find that although T2 and T3 are much larger than T1, their unit prices are 5.3% and 4.7% lower than the unit price of T1. Moreover, the average area of T4 is three times larger than T1, its unit price is only 4% more expensive than T1; similar for other piece-number apartments. Why are T1 apartments that expensive per m2? That might be because there are many students or young workers in Paris, they need to rent a big enough apartment, which makes investors invest in T1 apartments, which also leads to higher demands on T1. 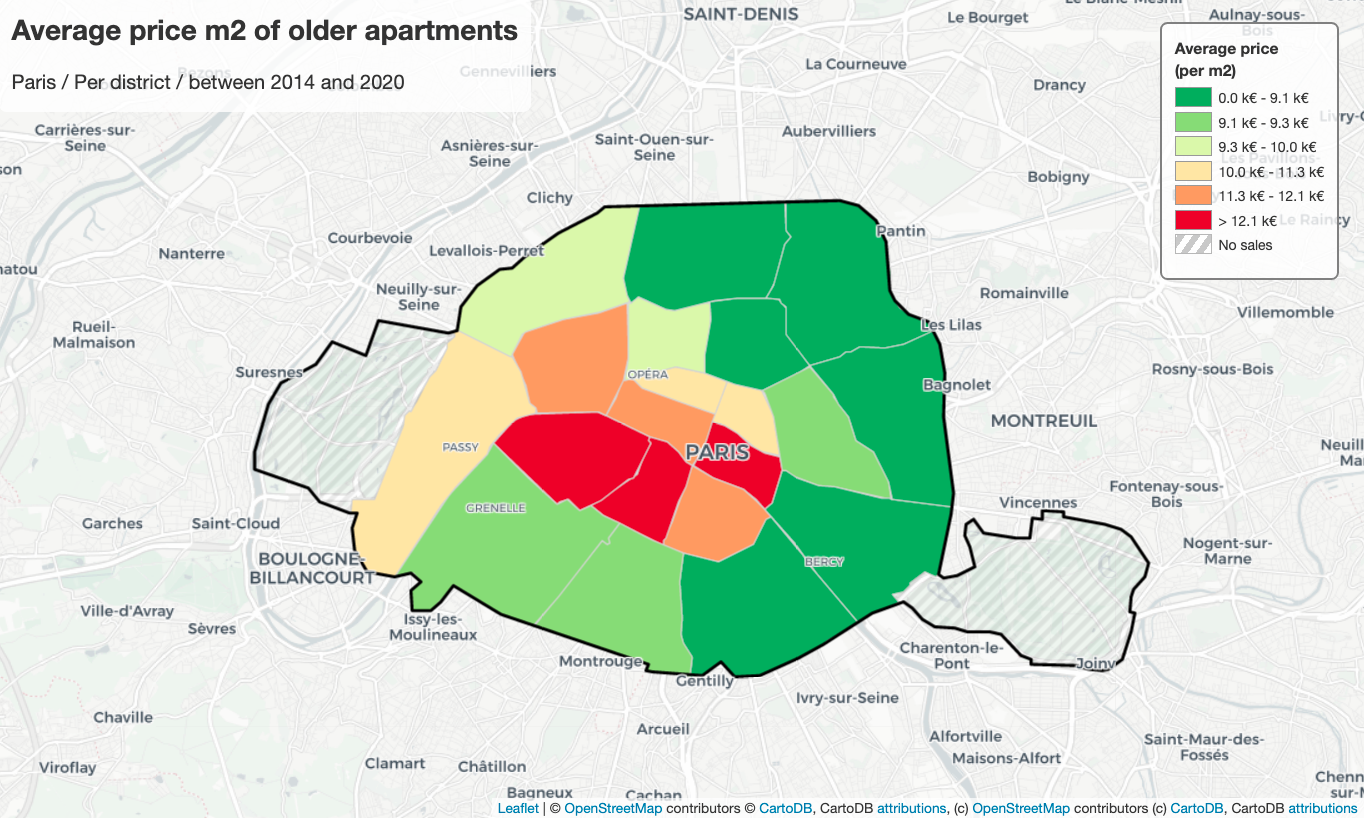 According to this map, we observe that the second-hand apartments in districts 1, 4, 6, 7 are much more expensive than other districts, their average unit price is at least 12000 euros; on the contrary, the second-hand apartments in districts 13, 19, and 20 are much cheaper than others, their average unit price is less than 8500 euros. This might be caused by geographical positions, the number of pieces, the apartment’s state, the performance of energy, public security, etc. The public transport in the city center is more than in other areas, there are also lots of shopping centers or tourist spots, which attracts a great deal of people, so that makes the city center to be more valuable.

Furthermore, according to the stacked bar plot below, it’s obvious that there are much more transactions in the 16th district than other areas, nearly 50% sold apartments are 2-room or 3-room apartments, and the transaction amount of T4 is pretty larger than all other districts. Paris 16 is eminently residential, as evidenced by its charming buildings with green courtyards and balconies. But it is also a Parisian cultural hotspot with many museums and emblematic places from both a historical and intellectual point of view. Moreover, it concentrates on many schools and establishments of choice for the education of children and students. All these might be the reason why the transactions in Paris 16 are much more than in other districts. For the districts as 1st, 2nd, or 3rd district, more than one-third of sold apartments are T1 apartments, that might because there are not that many apartments at the center of Paris, and its unit price is high. 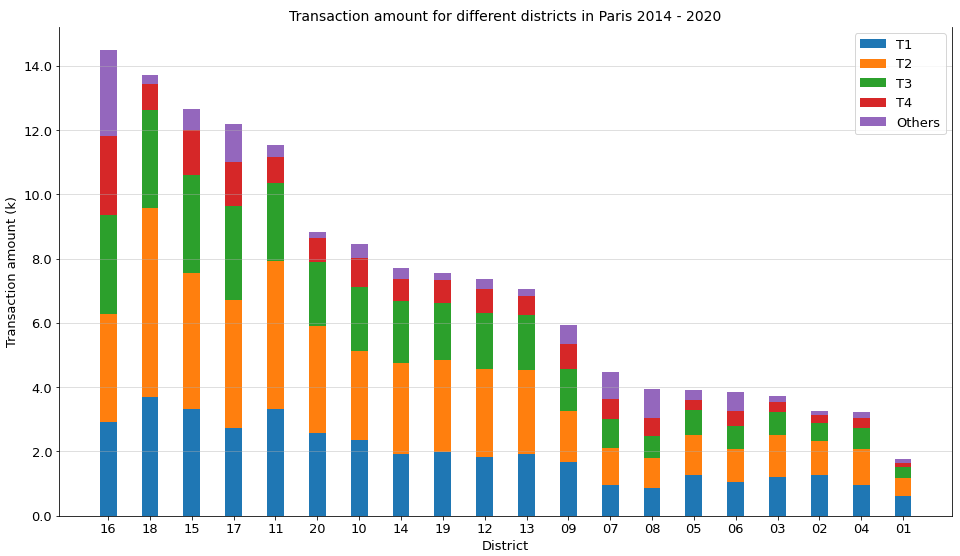 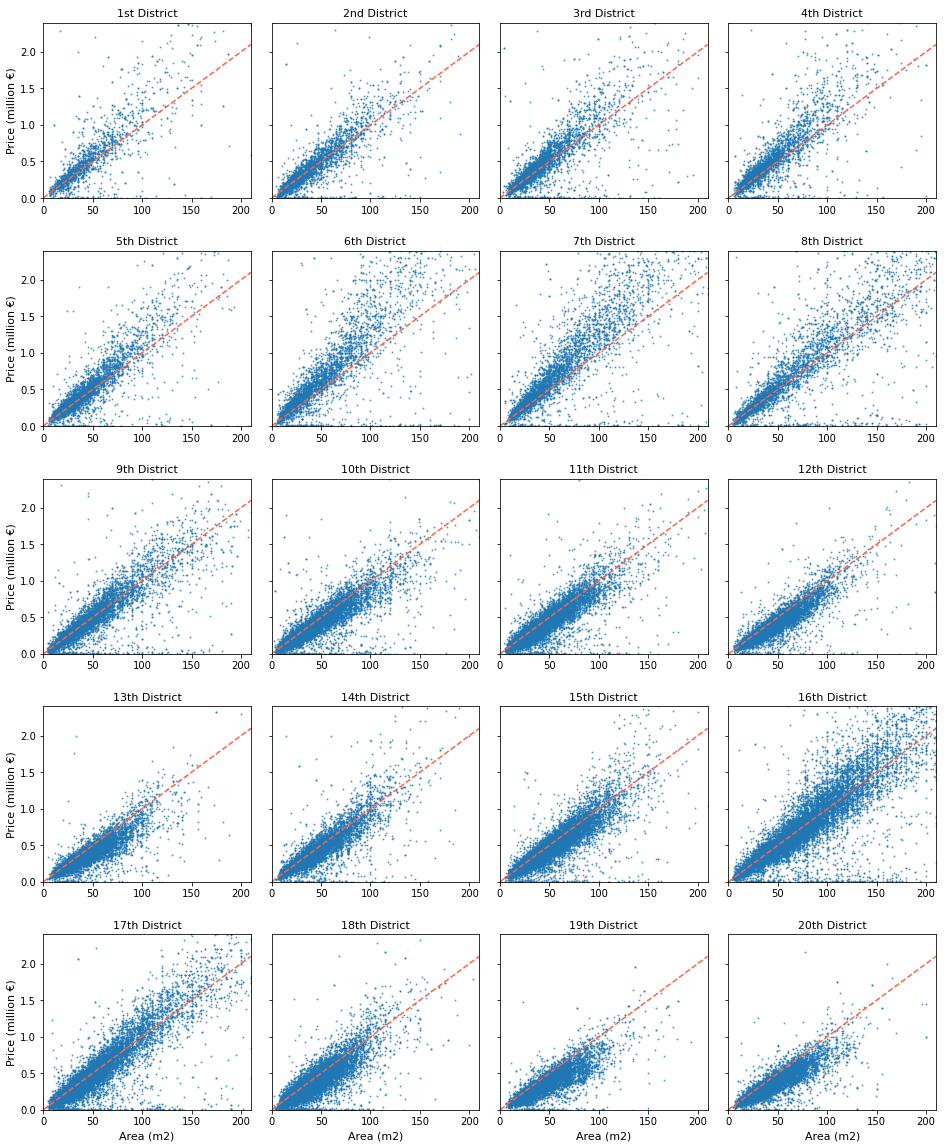 For the transactions of the downtown area, most of them are smaller than 50 m2, but their price varies widely to nearly 2 million euros; on the other hand, for the 8th, 16th, and 17th district, almost sold apartments’ price also arrive more than 2 million euros, but their area varies widely to 200 m2; moreover, there are also apartments whose unit price and area don’t vary that widely, as in 13th, 18th, 19th, and 20th district, most of the apartments here are smaller than 100 m2 and cheaper than 1 million euros, so than less than 10k euros per m2. 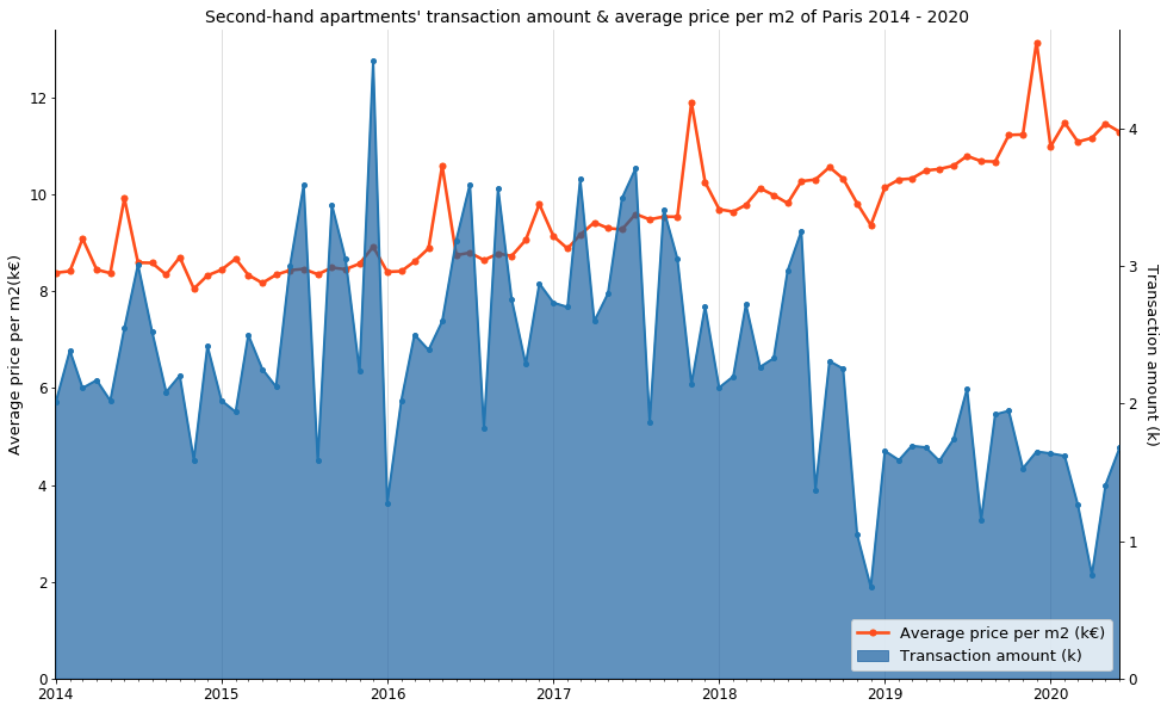 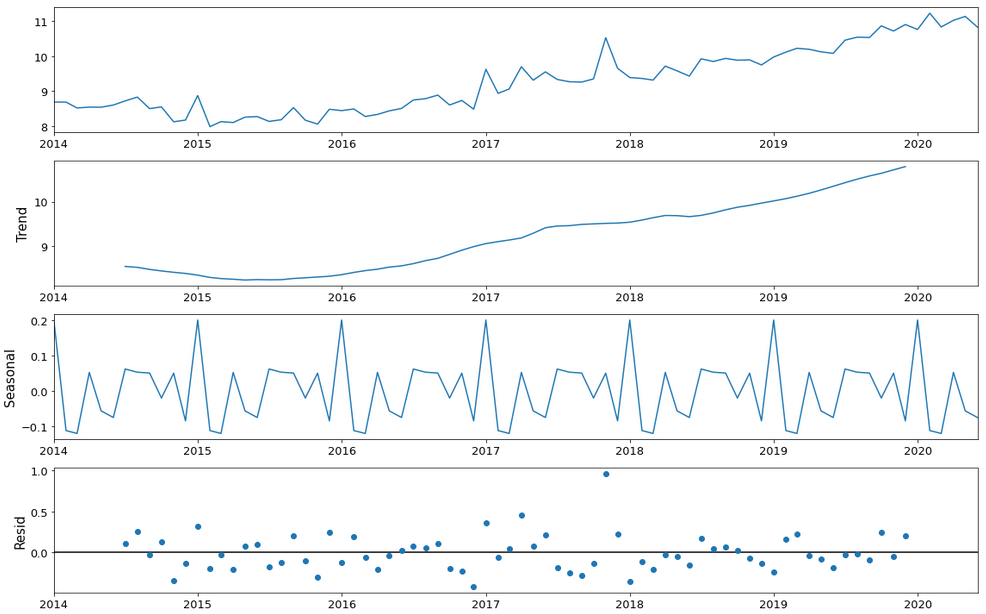 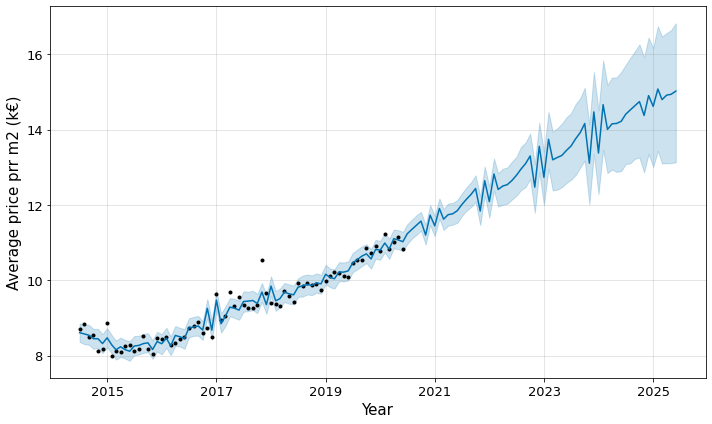