Île-de-France is the most populous of the 18 regions of France. It is located in the north-central part of the country and often called the Région Parisienne ("Paris Region") because it includes th...

Île-de-France is the most populous of the 18 regions of France. It is located in the north-central part of the country and often called the Région Parisienne (“Paris Region”) because it includes the city of Paris. Besides the landmarks of Paris, the region has many important historic sites, including the Palace of Versailles and the Palace of Fontainebleau, as well as the most-visited tourist attraction in France, Disneyland Paris. The poverty rate in Île-de-France was 15.9% in 2015, compared with 12.3% in 2006. The region is also increasingly unequal. Housing prices have pushed the less affluent outside Paris. In this blog, I’ll talk about the second-hand apartments purchases in Île-de-France between January 2014 and June 2020, with the following points:

First of all, I downloaded real estate transactions’ data on the site of government. In the dataset, we have transaction’s information from January 2014 to June 2020, like “id_mutation” to identify the transaction, “nature_mutation” specifies the sale’s nature, “nombre_pieces_principales” indicates the number of rooms, “valeur_fonciere” presents the sold price, “code_commune”, “nom_commune” and “code_departement” specify the communities and departments, “surface_reelle_bati” describes the real surface area, longitude and latitude can help us to determine the location. 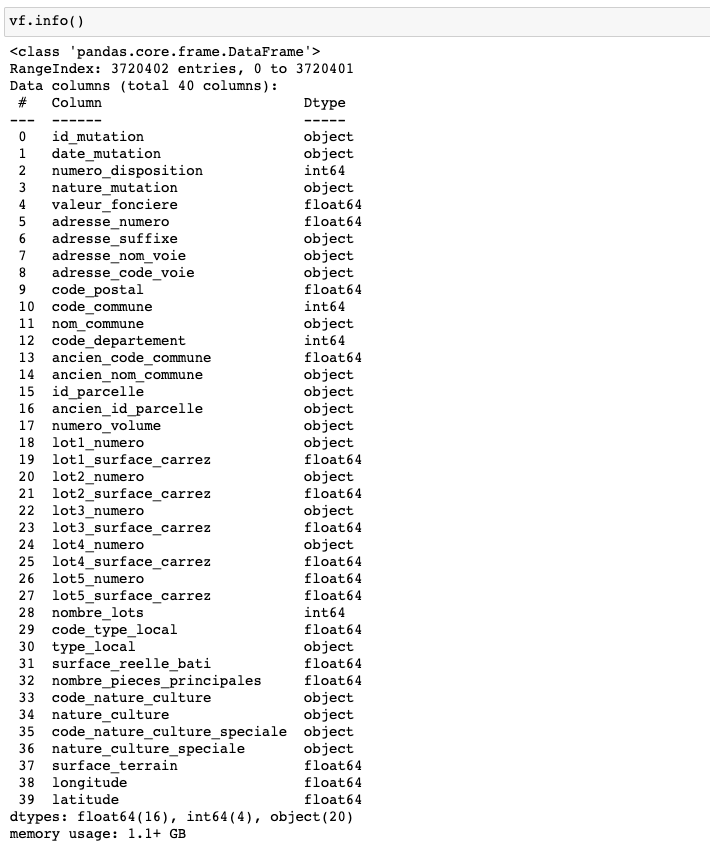 For this analysis, I only took account of second-hand apartments’ transactions with a positive area in Île-de-France. 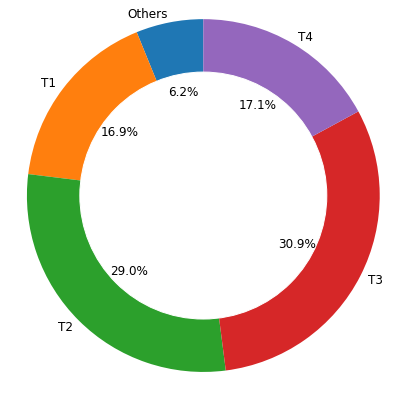 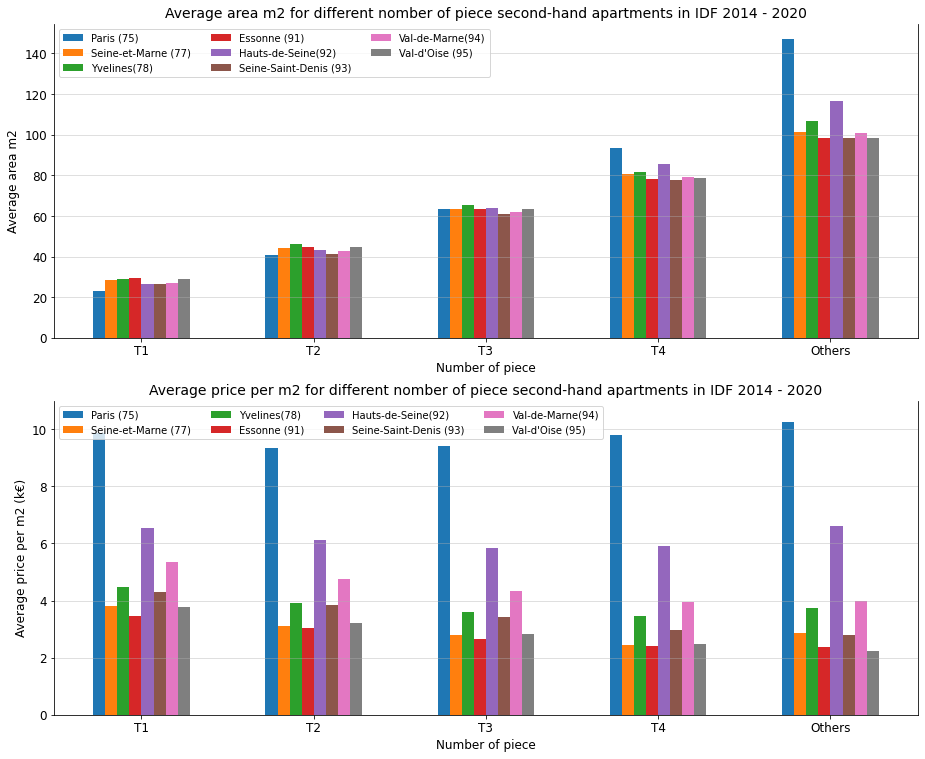 According to the second graph, we find that although T2 and T3 are much larger than T1, their unit prices are lower than the unit price of T1: the gap in Paris is 5.4% and 4.7%, respectively, concerning T1; the gap in other departments is pretty large (11% and 19%). Moreover, the average area of T4 is three times larger than T1, its unit price is 24% less expensive than T1 on average; except for Paris, T4’s unit price is 1% more expensive than T1 in Paris. Why are T1 apartments that expensive per m2? That might be because there are many students or young workers, they need to rent a big enough apartment, which makes investors invest in T1 apartments, it also leads to higher demands on T1. 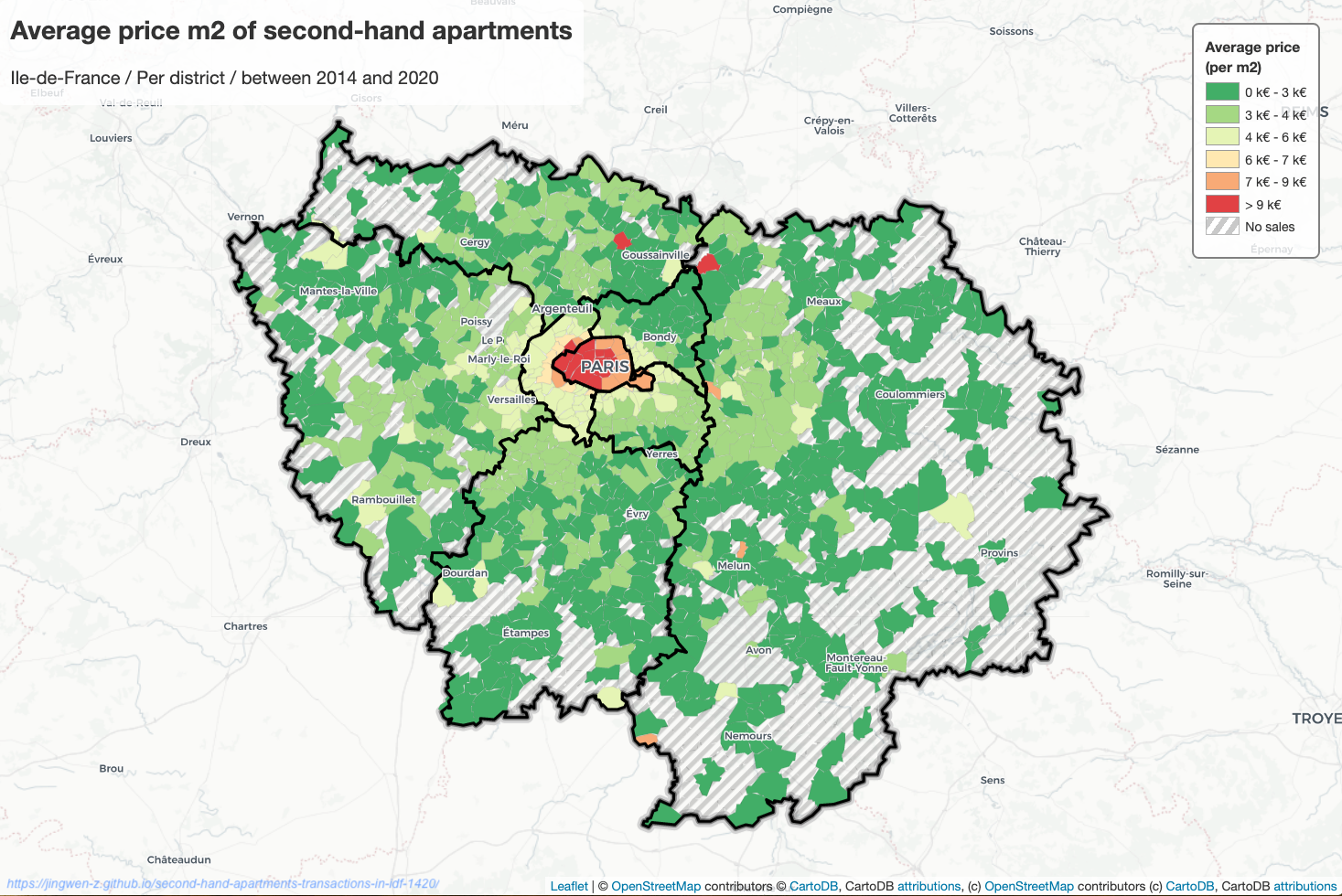 Furthermore, in the light of the stacked bar chart, it’s obvious that there are much more transactions in Paris, although it’s much more expensive than other departments, no matter which class of apartments. In Paris, 60% of transactions sold studio or 2-room apartment; but in other departments, the majority of transactions sold 2-room or 3-room apartments. One of the reasons might be the unit price in Paris is more expensive, the studio or 2-room apartment can satisfy the needs of people who live alone or in couple and satisfy the need for investors; on the contrary, people who live with family prefer the apartments outside Paris, they are larger and less expensive. 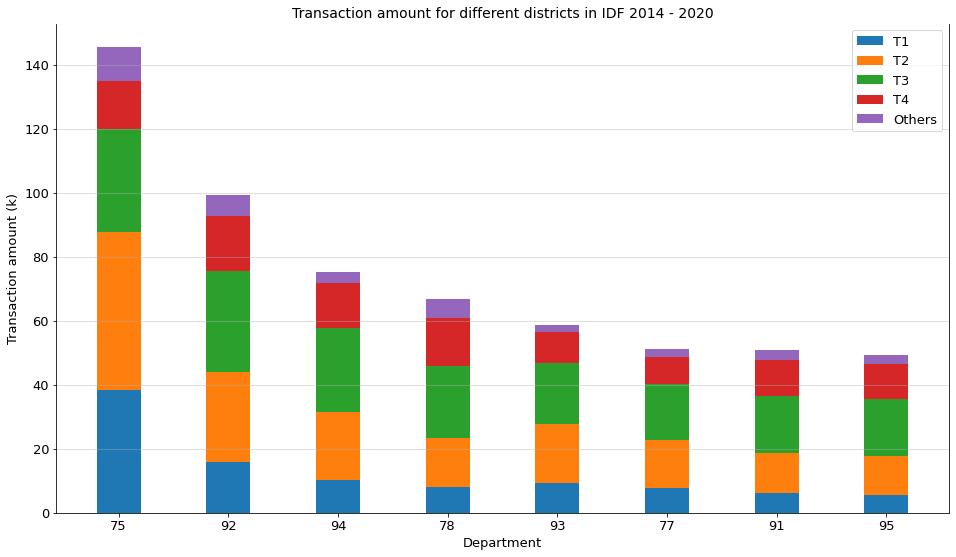 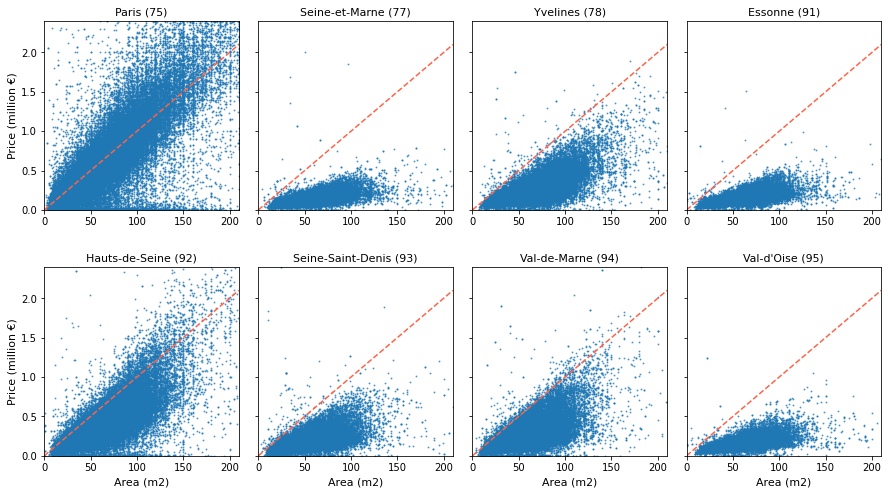 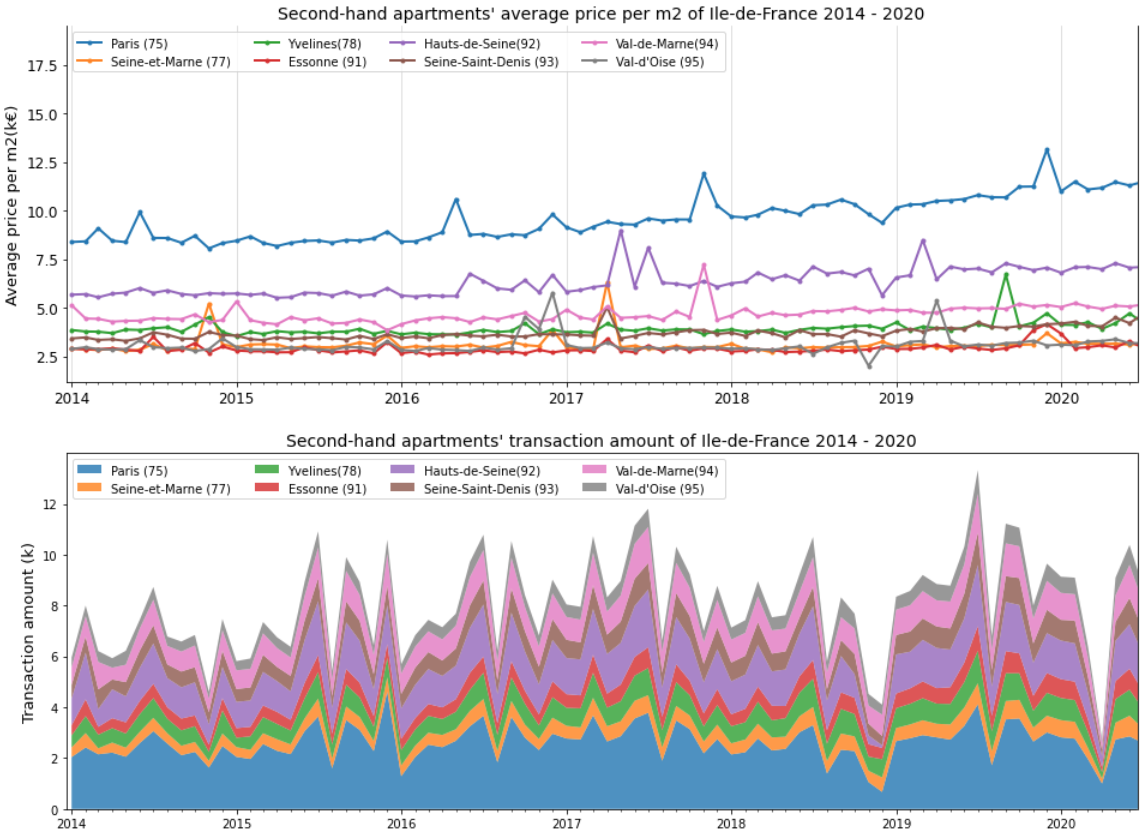 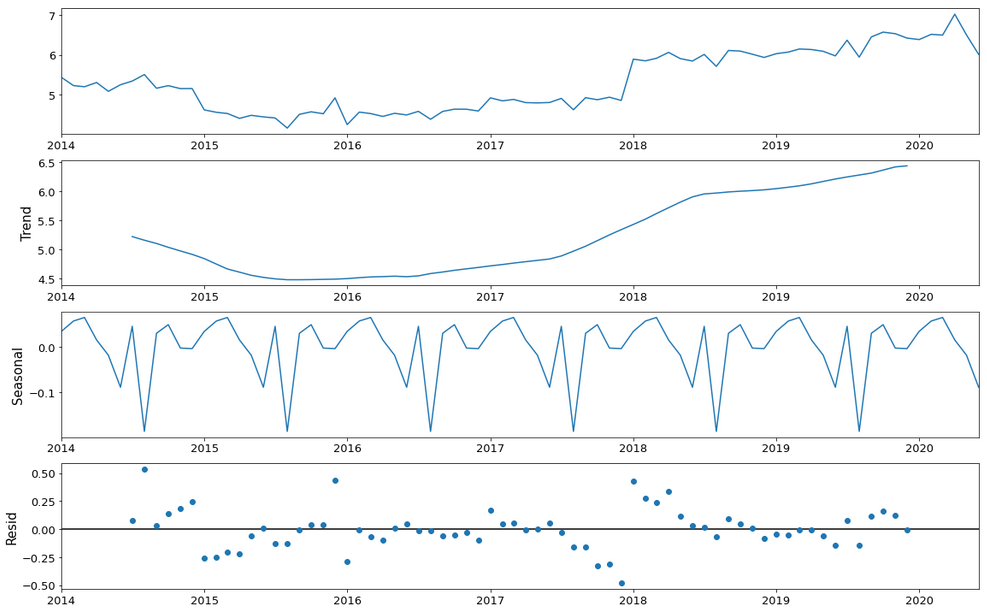 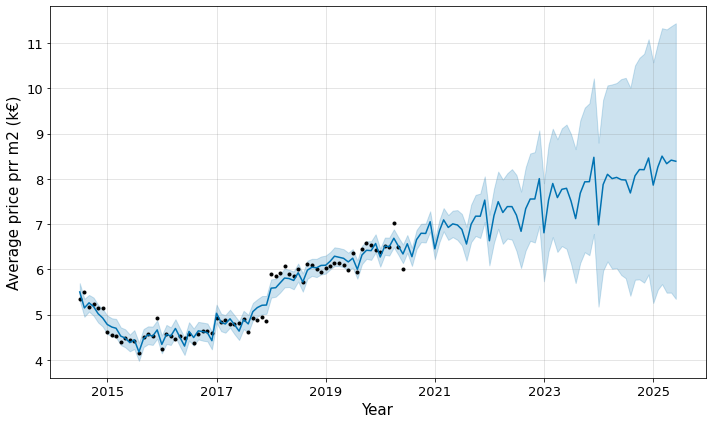