This blog presents the Coursera project "catch the pink flamingo". Here, you can find the data model design like classification, clustering, and the histogram made by splunk.

During last December and January, I participated Big Data courses on the website Coursera, like what I mentioned in my previous blog. Since schedual of the was really substantial, I didn’t have time to summary the knowledge in time, but they will be finished in several weeks. Today the capstone project of this course was finished, I want to firstly share this project with you by this blog.

All the data are about a mobile game, named “Catch the Pink Flamingo”. It’s producted by Eglence Inc. It’s a multi-user game where the players have to catch Pink Flamingos that randomly pop up on a gridded world map based on missions that change in real-time.

The objective of the game is to catch as many Pink Flamingos as possible by following the missions provided by real-time prompts in the game and cover the map provided for each level. The levels get more complicated in mission speed and map complexity as the users move from level to level.

In order to increase the revenue generated by the game “Catch The Pink Flamingo”, we need three subjects of datasets.

In the first one, “flamingo-data”, it contains 8 CSV files containing simulated game data and log data for the Catch the Pink Flamingo Simulated Game Data. These data will be used for data exploration in Splunk.

The “combined-data” contains a single CSV file created by aggregating data from several game data files. It is intended to be used for identifying big spenders with KNIME.

And “chat-data” contains 6 CSV files representing simulated chat data related to the Catch the Pink Flamingo game to be used in Graph Analytics with neo4j.

Combining all datasets together, analysing in different technologies will contribute to our decision in increasing revenue from game players.

Before analysing, let’s make some graphs to understand the data. Importing datasets of ”flamingo-data” into Splunk, using aggregation functions to make histograms as follows.

The first histogram is made by the data in “buy-clicks”, which shows how many times each item is purchased. Among six items, the item “2” is the most purchased, the item “1” is the least purchased.

The second one is made by the same dataset. According to this graph, we get different amount of money that made from each item. Among them, the item “5” made the most money, and the item “1” made the least money, which is also the least purchased, it means the item “1” is not preferred by most people. In this case, providers should think about strategies to change this situation or to solve this problem.

For the first method, we used “combined-data”, and classified users with Decision Tree in KNIME to identify big spenders in the game. The objective is to predict which user is likely to purchase big-ticket items while playing game. 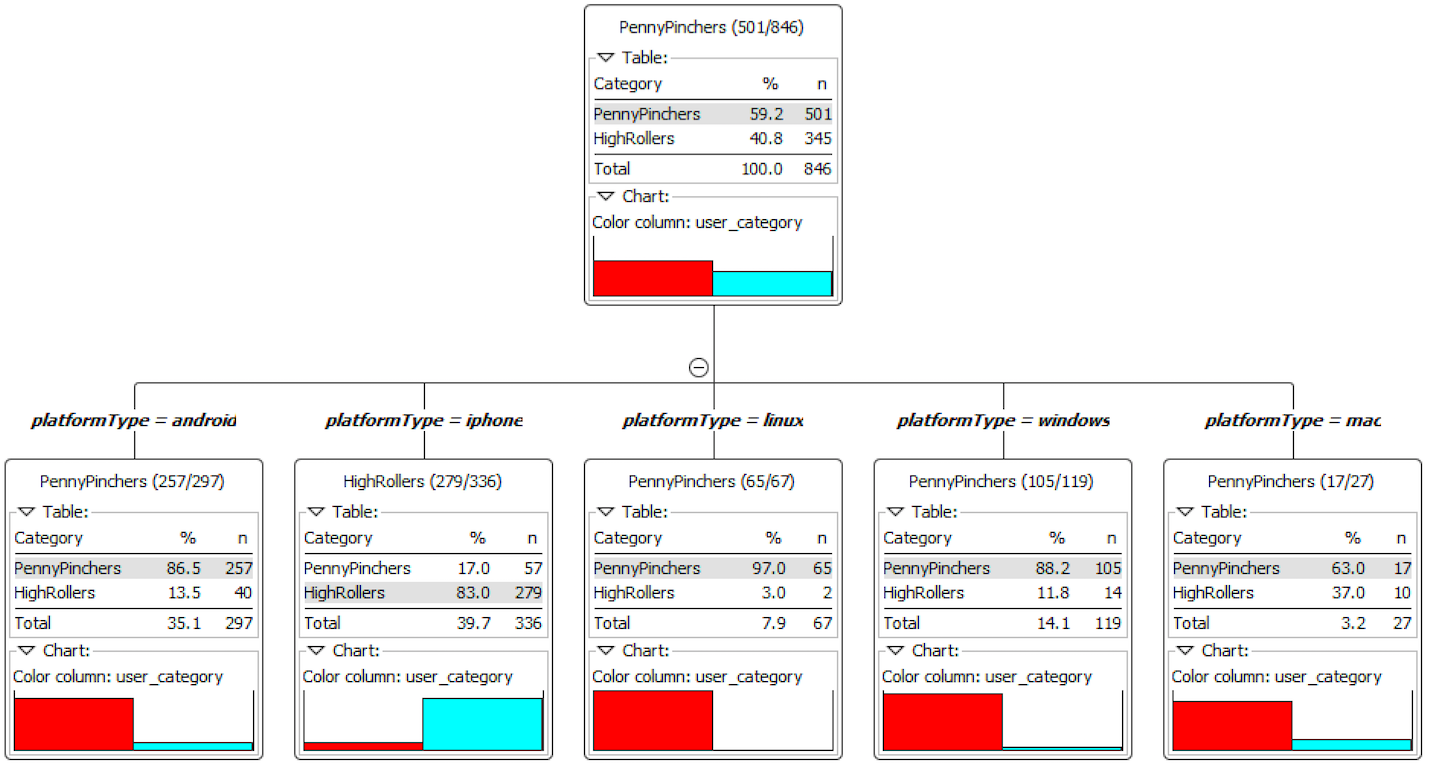 According to the resulting decision tree, it obviously shows that the predicted user_category is different in various platforms, the users on the platform android, linux, windows and mac are almost PennyPincher, however, most users which on the platform iphone are HighRoller.

Furthermore, thanks to the confusion matrix, our model has a 88.5% accuracy rate.

In this part, the Clustering method is applied, which is completed in iPython Notebook with Spark MLlib.

Cluster 1 is different from the others in that the users’ ad-clicks, game-clicks and cost are all less than others, this kind of users can be called “low level spending user”.

Cluster 3 is different from the others in that the users’ ad-clicks, game-clicks and cost are all more than others, this kind of users can be called “high level spending user”.

Cluster 2 is different from the others in that the ad-clicks is not the least, game-clicks is the most but their cost is not the most, this kind of users can be called “neutral user”.

In the last part, the Chat Graph Analysis is achieved by Neo4J.

The CSV data files of “chat-data” are loaded into Neo4J. Then we firstly find the top 10 chattiest users by matching all users with a CreateChat edge, return the users’ ID and the count of the users.

Following previous results, here are some recommendations to be considered:

Moreover, you can consult the slides and technical appendix on my GitHub, all propositions are welcome!

After finishing all courses in Big Data specilization, I got a certificate as follows. 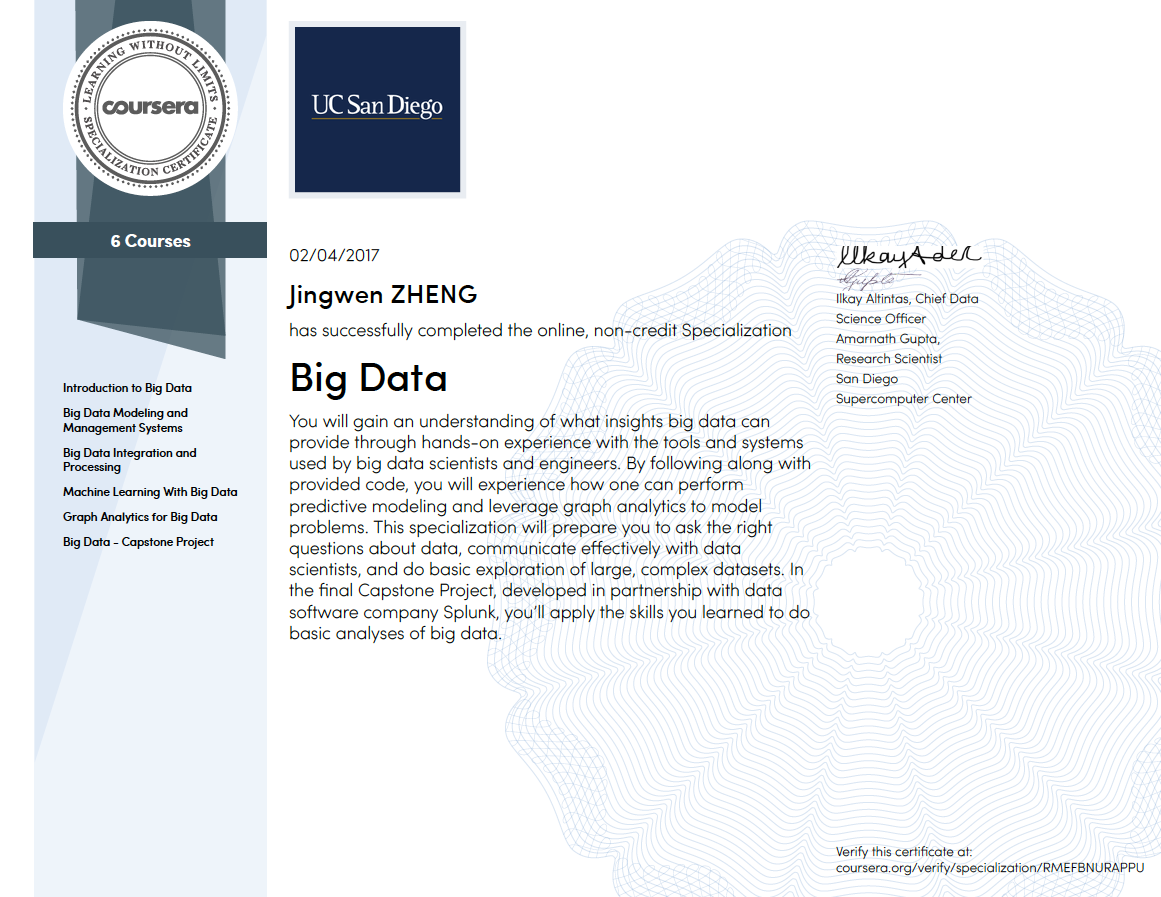 Thanks to the courses, I had a better understanding of Big Data, and got my dream job, Data Scientist. Well, a new journey will begin!