Forests are the dominant terrestrial ecosystem of Earth, and are distributed around the globe. Forests account for 75% of the gross primary production of the Earth's biosphere, and contain 80% of t...

Forests are the dominant terrestrial ecosystem of Earth, and are distributed around the globe. Forests account for 75% of the gross primary production of the Earth’s biosphere, and contain 80% of the Earth’s plant biomass. Net primary production is estimated at 21.9 gigatonnes carbon per year for tropical forests, 8.1 for temperate forests, and 2.6 for boreal forests. In this blog, I will talk about forest area with the following points:

Forest area evolution all over the world 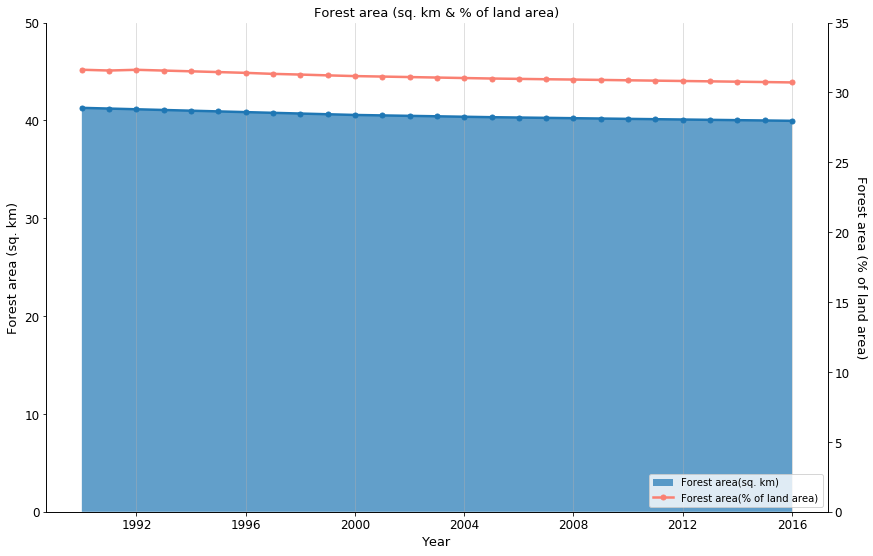 According to the graph above, obviously, Russia’s forest is larger than other countries in the world. The top 5 countries in terms of forest area are Russia, Brezil, Canada, United States and China; especially for China, its forest area increases 14.4% (264456 square km) from 2002 to 2016. In the following, I’ll introduce forest’s distribution over the world.

Europe’s 1 million hectares of forests comprise 27 percent of the world’s total forested area and cover 45 percent of the European landscape. A wide variety of boreal, temperate and subtropical forest types are represented, as well as tundra and montane formations.

However, the Amazon rainforest has been on fire for the past month, it’s home to at least 10% of the world’s biodiversity, produces 20% of the world’s oxygen and helps regulate the temperature of the whole planet. The Amazon is a giant carbon sink. If it burns, that carbon will all go into the atmosphere. Before the fires, land conversion and deforestation made the Amazon release up to 0.5 billion metric tons of carbon per year. According to the WWF, depending on the damage from these fires, that release would increase, accelerating climate change even further.

Human society and forests influence each other in both positive and negative ways. Forests provide ecosystem services to humans and serve as tourist attractions. Forests can also affect people’s health. Human activities, including harvesting forest resources, can negatively affect forest ecosystems. Thus, only human protects forest so that forests will supply us more and more pure air.

If you are interested in the python codes behind the graphs, here you are :)

PREVIOUSClimate change Series 3: Electric and energy use
NEXTHow to draw a map with folium module in Python?
Search