Since mid February, the situation of COVID-19 in China begins to be stable, but it propagates in the Rest of the World. In this blog, I'll talk about its propagation around the world.

Since mid February, the situation of COVID-19 in China begins to be stable, but it propagates in the Rest of the World. In this blog, I’ll talk about its propagation with the following points: 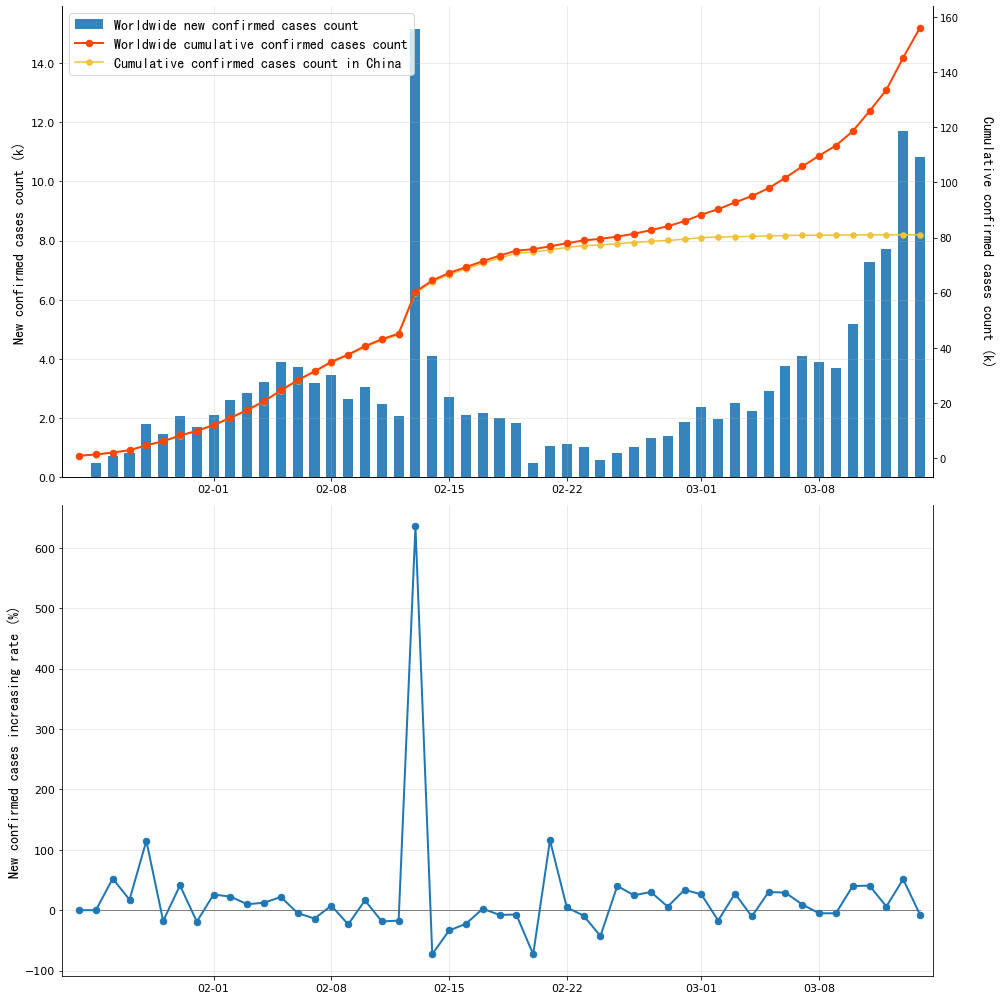 According to this graph, we find that since around 22 February, COVID-19 in China begins to be stable, but it propagates in the Rest of World. As of 14 March, there were about 156038 cases of COVID-19, an increase of 10817 cases from the previous day. The new confirmed evolution per day is about 50% for the whole world. 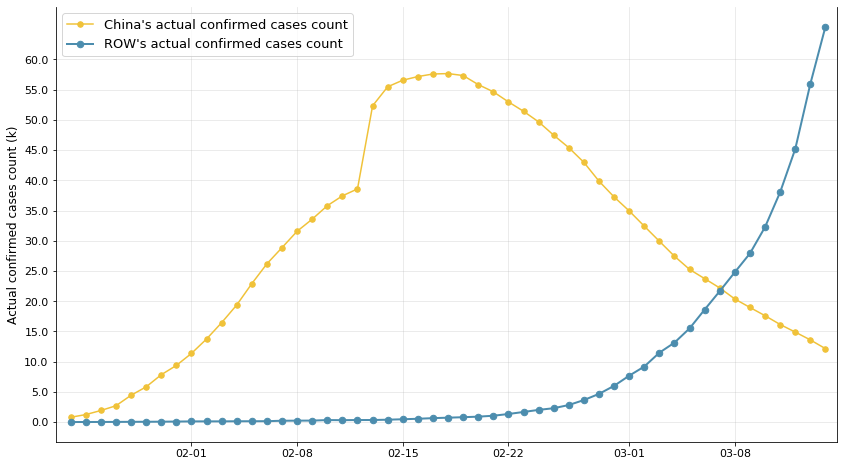 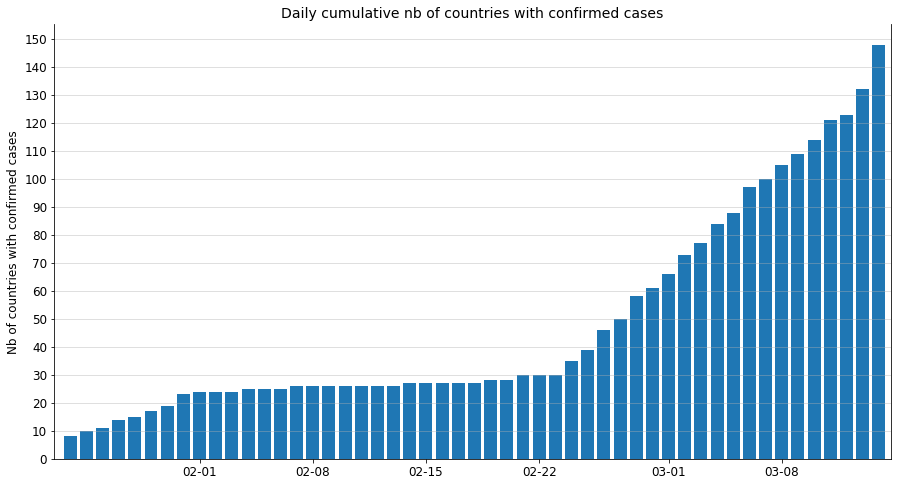 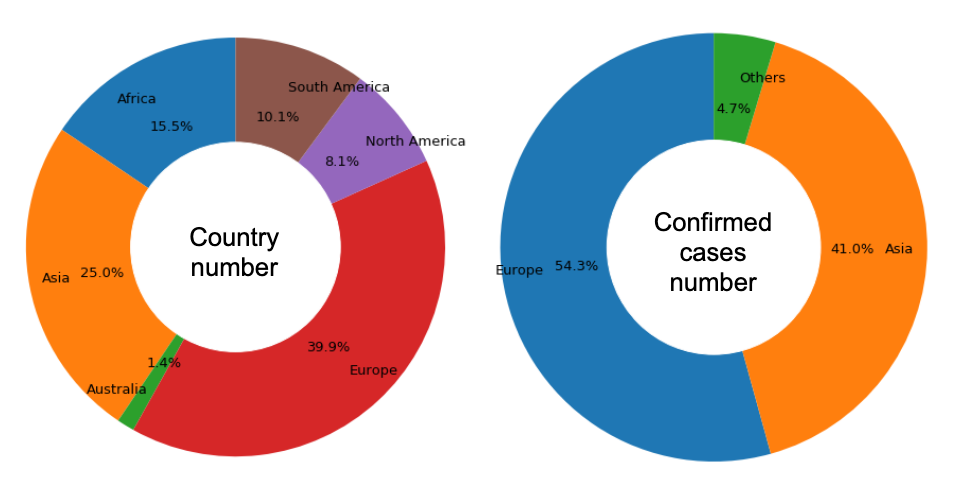 As of 14 March, there are 148 countries who have confirmed COVID-19 cases. Among these countries, 40% are in Europe, 25% are Asian countries, nearly 16% are in Africa, 18% are in North and South America, others are in Australia. In terms of confirmed cases, 54.3% are in Europe, 41% for Asia, the rest are in other continents. 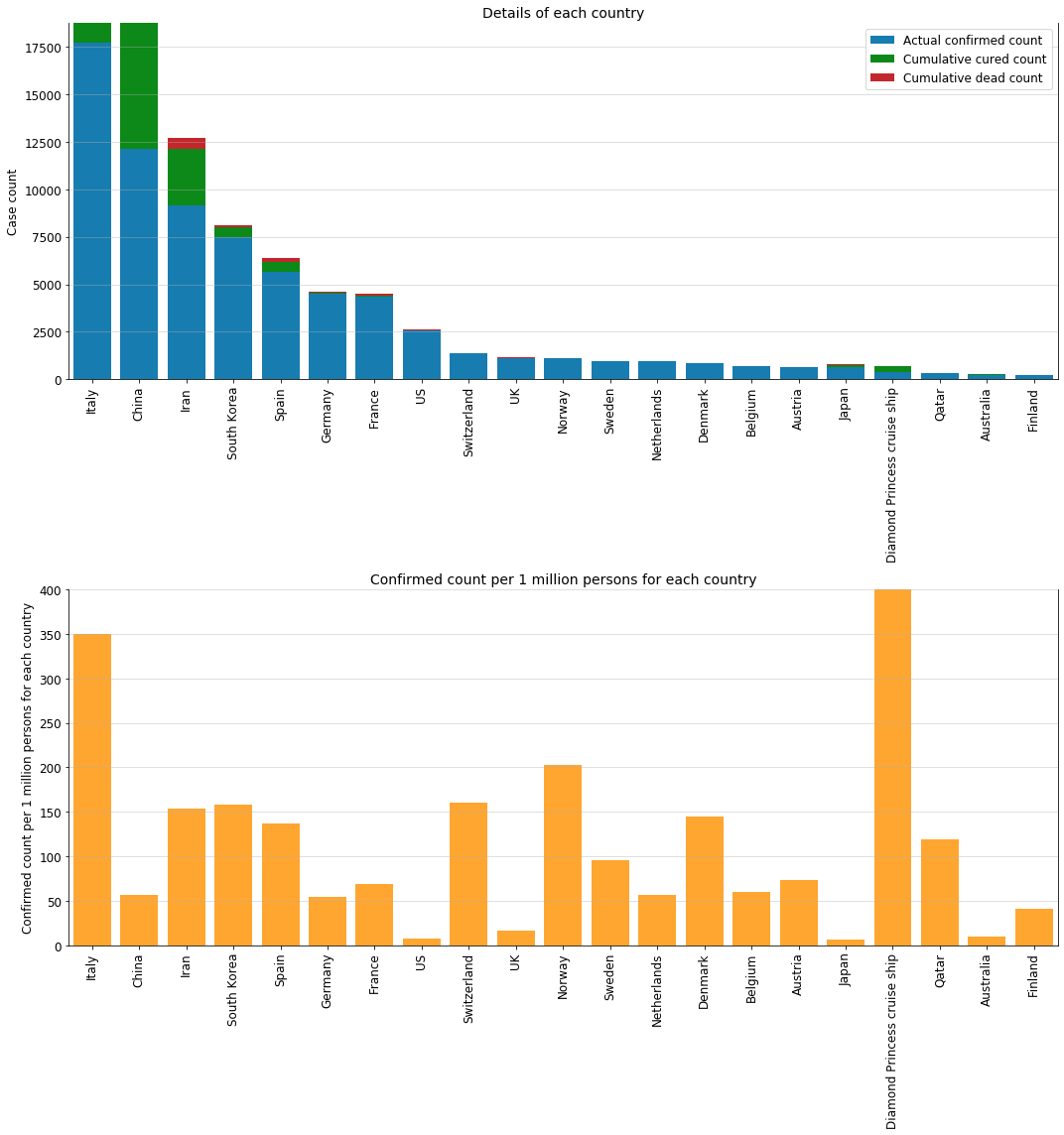 Here, I take only the top 20 countries in terms of actual cases number. As of 14 March, Italy has nearly 17500 confirmed cases, which is more than other countries. For the plot below, I calculated the confirmed count per 1 million persons for each country, and found that in China every million persons have 57 confirmed cases. You might say “it’s not that much”, but please don’t forget that Chinese make effort to restrain the propagation of COVID-19. Now let’s see other countries. In Italy, there are 350 cases among each 1 million people, which is nearly 6 times more than China. In Norway, 200 cases for each 1 million people. Nearly 150 cases for 1 million people in South Korea, Iran and Spain. There should be various reasons for this situation, such as people don’t pay attention on it, medical resources are not enough, people don’t understand well about the virus, etc.

Daily cumulative confirmed count for each country (without China) 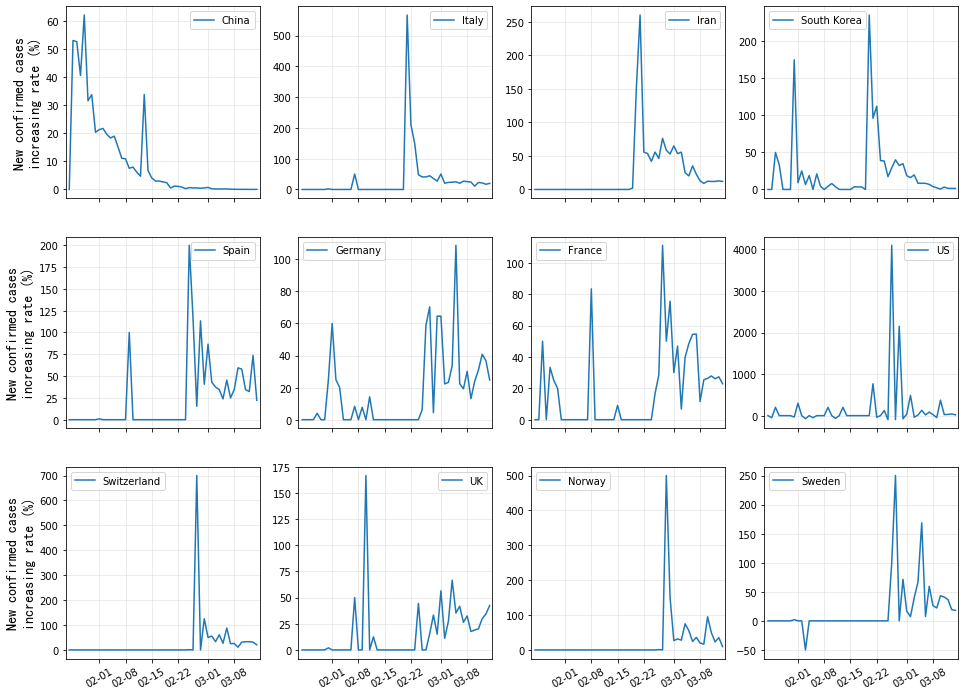 According to this plot, we observe that the outbreak in both Italy and Iran is around 21 February, if the incubation is regarded as 14 days, we can deduce that the first source of infection arrived in Italy and Iran on around 7 February. Then the outbreak in Spain, Germany, France, US, Switzerland, Norway and Sweden were nearly at the same moment, which was 1 week later than Italy. Considering the restraint of moving in Europe or between Europe and US is not that restricted, which accelerated the propagation. Moreover, since 22 February Italy imposed the quarantine of 11 municipalities in north Italy, so that the evolution get decreasing day by day, it shows that the first measure of Italy has its significance.

On 22 February, the government announced a new decree imposing the quarantine of more than 50,000 people from 11 different municipalities in Northern Italy. The quarantine zones are called the Red Zones and the areas in Lombardy and Veneto outside of them are called the Yellow Zones. Penalties for violations range from a €206 fine to three months of imprisonment. The Italian military and law enforcement agencies were instructed to secure and implement the lockdown.

On 4 March, the Italian government imposed the shutdown of all schools and universities nationwide for two weeks as the country reached 100 deaths from the outbreak. The same day, the government ruled that all sporting events in Italy would be played behind closed doors until 3 April.

In the night between 7 and 8 March, the government approved a decree to lock down Lombardy and fourteen other provinces in Veneto, Emilia-Romagna, Piedmont and Marche, involving more than 16 million people. The decree “absolutely avoided any movement into and out of the areas” and, like the previous one, it provided sanctions of up to three months in prison for those who violated the lockdown. It was possible to move into and out of the areas only for emergencies or “proven working needs”, which must be authorized by the prefect. The decree also established the closure of all gyms, swimming pools, spas and wellness centres. Shopping centres had to be closed on weekends, while other commercial activities could remain open if a distance of one metre between customers could be guaranteed. The decree imposed the closure of museums, cultural centres and ski resorts in the lockdown areas and the closure of cinemas, theatres, pubs, dance schools, game rooms, betting rooms and bingo halls, discos and similar places in the entire country.

In the evening of 9 March, Conte announced in a press conference that all measures previously applied only in the so-called “red zones” had been extended to the whole country, putting approximately 60 million people in lockdown.

In the evening of 11 March, Conte announced a tightening of the lockdown, with all commercial and retail businesses except those providing essential services, like grocery stores and pharmacies, closed down.

On 9 March, President of the regional government of Madrid, Isabel Díaz Ayuso, announced the cancellation of classes in the Autonomous community of Madrid at all educational levels due to the strong increase in cases in the region, a measure that would affect more than 1.5 million students. On 12 March, nationwide closure of schools after all Autonomous Communities order it. More than 10 million students (1 million from university and 9 million from schools) ordered to stay at home for a period of two weeks. On 14 March, the Spanish government imposes a nationwide lockdown, bans all trips that are not force majeure and announces it may intervene in companies to guarantee supplies.

On 13 March, 14 of the 16 German federal states decided to close their schools and nurseries for the next few weeks. Germany’s neighbours Czech Republic, Poland and Denmark closed their borders.

France has a plan to the coronavirus pandemic, which is based on the Orsan plan and more specifically the Orsan REB component, devoted to epidemic and biological risks. It was launched on February 23 by Olivier Véran, Minister of Solidarity and Health. This plan has four stages:

On 28 February, France passed to “Stage 2”. Gatherings are prohibited in the Oise, in the municipalities of Creil, Crépy-en-Valois, Vaumoise, Lamorlaye and Lagny-le-Sec must limit moving and close schools.

On 12 March, president of France Emmanuel Macron announced on public television that all schools and all universities would close from Monday 16 March until further notice. The next day, the prime minister Édouard Philippe banned gatherings of more than 100 people, not including public transportation. The following day, the prime minister ordered the closure of all nonessential public places, including restaurants, cafés, cinemas, and discothèques, effective at midnight.

On 14 March, stage 3 of the Orsan REB plan is activated in the event of a doubling of contamination in 72 hours. Prime Minister Édouard Philippe announced from midnight on March 15 and until further notice, the closure of all “non-essential” public places. Exceptions are pharmacies, banks, food stores, gas stations, tobacconists and newsagents.

On 28 February, the Federal Council announced an immediate ban on all public and private events involving more than 1000 participants, as one of the efforts to curb the spread of COVID-19 infection. Further, events of 150 or more now need federal permission. (SwissWatch) Multiple prominent events were cancelled including the Geneva Motor Show, which was attended by 660,000 people in 2018.

On 13 March 2020, the Federal Council decided to cancel classes in all educational establishments until 4 April 2020, and has banned all events (public or private) involving more than 100 people. It has also decided to partially close its borders and enacted border controls.The canton of Vaud took more drastic measures, prohibiting all public and private gatherings with more than 50 people, and closing its educational establishments until 30 April.

On 3 March, the government declared the coronavirus outbreak as a “level 4 incident”, permitting NHS England to take command of all NHS resources. Planning has been made for behaviour changing publicity including good hygiene and respiratory hygiene (“catch it, bin it, kill it”), a simple measure which helps in delaying the peak of the infection and buys time for the testing of drugs and initial development of vaccines.

On 14 March, the UK’s chief scientific adviser has said the government wants 60 percent of the population to catch coronavirus to try and create “herd immunity” to protect against the virus becoming an annual crisis.

On 12 March a national lock-down was announced, effective from 18:00 the same day. For two weeks, schools, kindergartens, fitness centres, hair salons etc. are closed. Sports and cultural events and gatherings are banned and restrictions apply to restaurants. These measures are in line with the those introduced in other European countries such as Denmark and Italy. The same day, it had its first death due to the COVID-19 virus.

On 10 March, the Public Health Agency of Sweden raised the level of risk of the virus spreading from “high” to “very high”, which is the highest level. This comes after news that there are indications of ongoing local transmission in the Stockholm and Västra Götaland area.

On 11 March the Stockholm region decided to only test hospitalised patients from risk groups and health care staff with symptoms. Other regions will follow suit within the coming week. This means the data on the Public Health Agency of Swedens website is not reflecting the actual infected persons in the country, since local transmission has been ongoing since at least early March. The government has banned all gatherings larger than 500 people, under threat of fines and a six-month prison sentence.

On 12 March, the government announced new measures that will be in effect through the end of the month. All events (concerts, sports) and all work meetings with more than 100 people are now forbidden and the RIVM is encouraging people to work from home. The restriction also applies to museums. All Dutch universities will suspend physical teaching until 1 April, but online teaching will continue. Schools remain open.

Starting 13 March 2020, all people working in non-essential functions in the public sector must stay home for two weeks.[74] In the private sector, employers are urged by the authorities to allow their employees to stay home in the same period and work from there if possible, although this should not affect functions that are essential to the society (such as pharmacy workers and people working with sale of food and maintenance of critical infrastructure).

If you are interested in the scripts, please find them here.