Automating python scripts to run by GitLab CI (Runner) needs to configure with ".gitlab-ci.yml" with multiple parts like image, stage, only, manage environments and settings on GitLab.

This blog specifies how to automate python scripts to run by GitLab CI. In the following, I will talk about each element of the configuration with “.gitlab-ci.yml”, manage environments with anaconda and “environment.yml”, and settings on GitLab.

Before all, I would like to specify my working environment.

Following is one example:

In this example, there are several parts: stages, image, stage, script, only, tags. I’ll introduce them one by one.

stages is used to define stages that can be used by jobs and is defined globally.

The specification of stages allows for having flexible multi stage pipelines. The ordering of elements in stages defines the ordering of jobs’ execution:

This allows to specify a custom Docker image that can be used for time of the job. In our case, we need to use connect Teradata which officially supports only CentOS and RHEL Linux distributions, so we built upon Jeremy Marshall’s docker-teradata-client container and moble’s miniconda-centos container.

If the configuration interests you, more information here.

stage is defined per-job and relies on stages which is defined globally. It allows to group jobs into different stages, and jobs of the same stage are executed in parallel.

script is the only required keyword that a job needs. It’s a shell script which is executed by the CI.

The scripts in ‘tests’ update pip, install packages in requirements.txt with pip, and discover unit tests that ends with ‘_test.py’.

We created a conda environment quietly from file jobs/environment.yml (I’ll talk about this file in the next part), then switching to the new environment which is defined by the file, and run python script jobs/weekly_job.py by python.

only defines the names of branches and tags for which the job will run.

There are a few rules that apply to the usage of job policy:

In addition, only allows the use of special keywords. For example, variables keyword is used to define variables expressions, in other words you can use predefined variables / project / group or environment-scoped variables to define an expression GitLab is going to evaluate in order to decide whether a job should be created or not; using refs to specify that a branch is pushed and scheduled pipelines.

In the example, the job only runs when it satisfies the following conditions:

tags is used to select specific Runners from the list of all Runners that are allowed to run this project.

With conda, you can create, export, list, remove and update environments that have different versions of Python and/or packages installed in them. Switching or moving between environments is called activating the environment. You can also share an environment file.

You can create an environment file manually to share with others.

An environment.yml file should specify environment’s name with name, and dependable packages with dependencies.

A Runner can be specific to a certain project or serve any project in GitLab CI. A Runner that serves all projects is called a shared Runner. You can find more information about configuration here.

Before running, don’t forget to go to Settings > CI/CD > Runners settings to active your runner.

Pipeline schedules can be used to run a pipeline at specific intervals, for example every Monday at 7:00 for a certain branch.

In order to schedule a pipeline:

Moreover, You can pass any number of arbitrary variables and they will be available in GitLab CI so that they can be used in your .GitLab-ci.yml file. 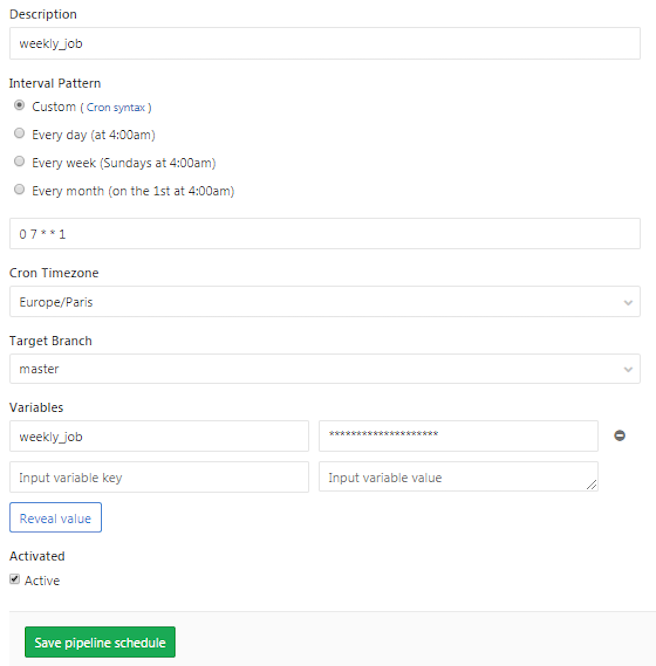