Have your heard about the classic use case of association analysis -“Beer and diaper” at Walmart? In this story, Walmart foundthat beer and diapers were often sold together, we can use association ...

In this blog, I will introduce some useful concepts and then a use case of association analysis.

Association analysis is a rule-based machine learning method for discovering interesting relations between variables in large databases. It is intended to identify strong rules discovered in databases using some measures of interestingness.

Let X be an itemset, X => Y an association rule and T a set of transactions of a given database.

Confidence is an indication of how often the rule has been found to be true.

The confidence value of a rule, X => Y, with respect to a set of transactions T, is the proportion of the transactions that contains X which also contains Y.

Confidence is defined as:

means the support of the union of the items in X and Y. This is somewhat confusing since we normally think in terms of probabilities of events and not sets of items. We can rewrite

are the events that a transaction contains itemset X and Y, respectively.

, the probability of finding the RHS of the rule in transactions under the condition that these transactions also contain the LHS.

The lift of a rule is defined as:

or the ratio of the observed support to that expected if X and Y were independent.

If the lift is > 1, that lets us know the degree to which those two occurrences are dependent on one another, and makes those rules potentially useful for predicting the consequent in future data sets.

The value of lift is that it considers both the confidence of the rule and the overall data set.

I will use the Groceries dataset which comes from package arules.

Before creating the model, we have a view of data. In this dataset, there are 9835 transactions and 169 items, the density of 1 in sparse matrix is 0.02609146. The 5 most frequent items are whole milk, other vegetables, rolls/buns, soda and yogurt. Element length distribution shows items’ amount in the transaction and transactions’ amount. For instance, 2159 transactions have only 1 item, 545 transactions have 7 items, and only 1 transaction has 27 items.

The value of support is useful for creating the model. We can use the function itemFrequencyPlot() to check top N frequent item. 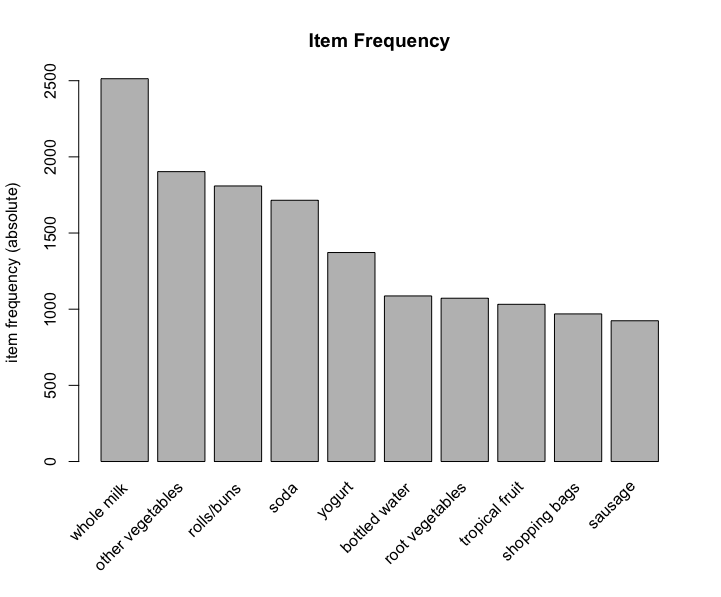 Now we have a clear idea about the data, next we can create the model.

inspect() function shows us each rule in detail, its support value, confidence value and lift value. 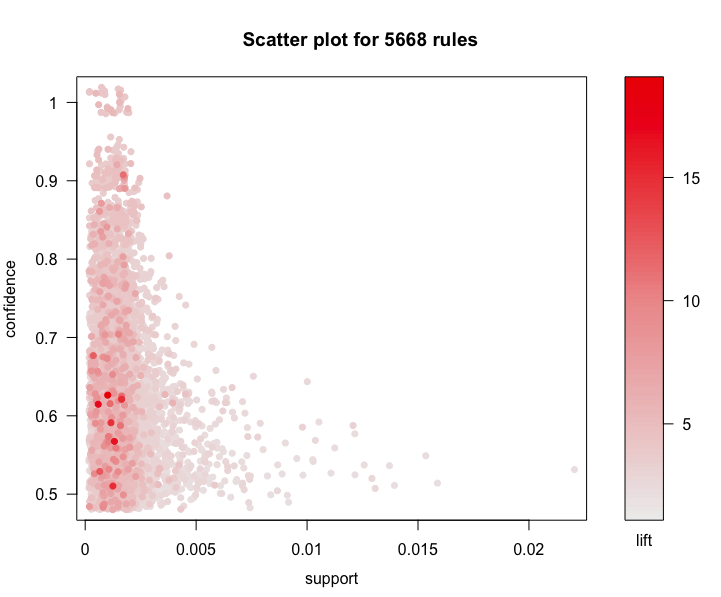 According this scatter plot, we find that support values of association analysis in general are lower, confidence values are well-distributed, and lift values of most rules are greater than 3. So these rule are significant.

Grouped matrix plot cluster similar rules, then shows the general distribution of clustered rules. Be default, number of cluster is 20, here I set to 15. 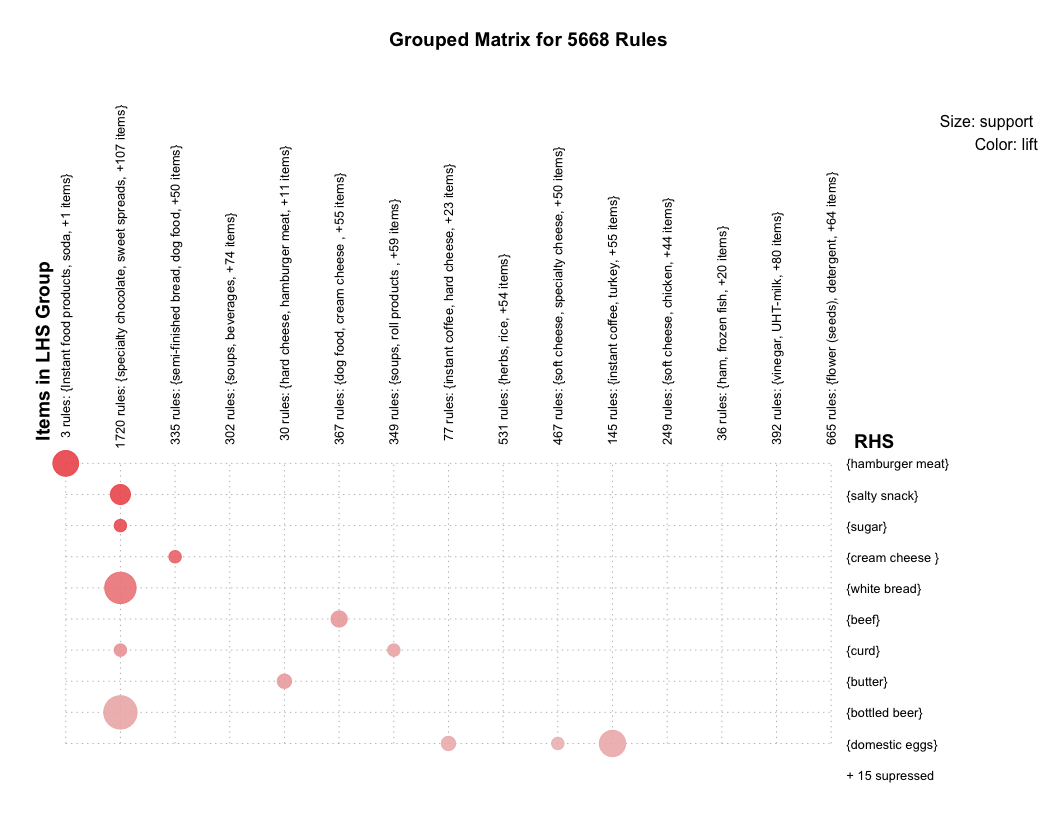 Similar association rules are grouped into one cluster, which can extract the overall regularities and similarities of association rules. Horizontal ordinate stands for 15 clusters, vertical ordinate stands for the items generated by 15 rules. The depth of color presents the degree of lift, the deeper color is, the larger lift is. The size of circle presents the degree of support, the bigger circle is, the larger support is.

Since there are enormous rules, here I just take 10 rules whose lifts are 10 largest, to make graph plot. 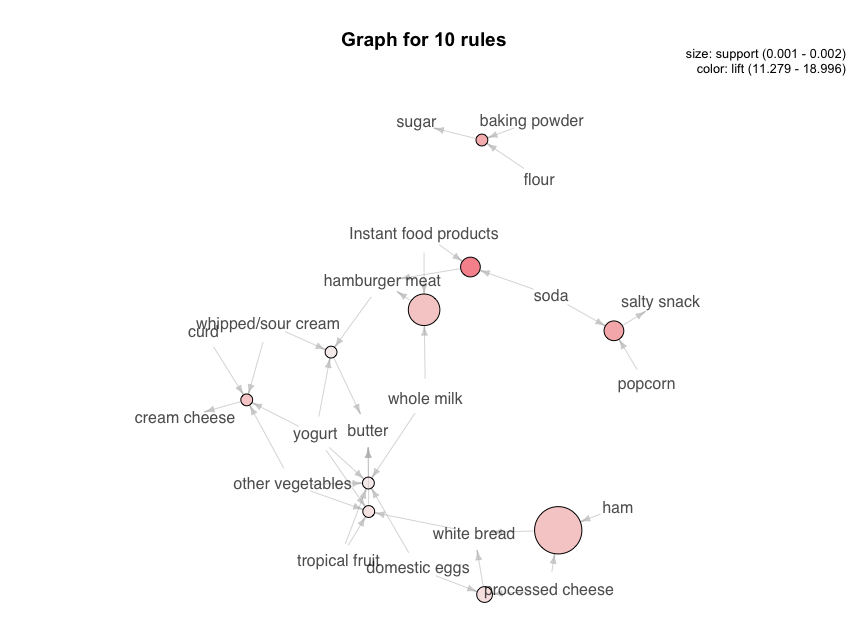 Following codes create a dynamic graph which is similar as above.

How to understand this graph? Let’s take “yogurt” as an example. Click circle “yogurt”, then the circle is linked with other 4 circles, 3 small and 1 big, each of them stands for a basket. We can take the biggest one, click it, then we find that in this basket, there are also butter, whole milk, domistic eggs, tropical fruits and other vegetables. So we can say that all these products are associated with yogurt.

Association analysis is a useful way to analyse the relation between 2 different products, which can also help the decision of retailing.

PREVIOUSfrance is AI
NEXTReview of 2017
Search